In this lesson, students will work in pairs using the 3Doodler to explore states of matter. Students will investigate water as a liquid, solid and a gas as they create ice-lanterns frozen in the natural winter elements outside or in the freezer. The results of this investigation are as beautiful as they are memorable.

collaborationcoolingfreezegasheatingiceliquidmeltProblem Solvingsnowsolidstates of mattertemperaturewaterwater cycle
Note: Any links outside of the3doodler.com are optional resources. We can’t ensure their upkeep or accuracy.

A) Create setups of cups, liquid, and glitter for each pair of students before this lesson.

B) Print one Water Observation Sheet for each pair before this lesson.

Whole group: Discuss and assess what students know about water in its 3 states, i.e., as a solid, liquid, and a gas.

Review the vocabulary words related to this lesson.

Share the goal: In this session, students will work with a partner to doodle an ice-lantern using a 3Doodler, a cup, glitter and water. Ask students what they know about lanterns and what they are used for. Share some images of lanterns to solidify their understanding.

Model how to doodle a design for an ice-lantern. Doodle connecting lines all around the outside of a paper cup. Note that all of the lines must connect. After the lines harden, gently lift them off the cup for students to observe.

Combine glitter and water in a 2nd paper cup. Mix with a spoon or a stir stick. Have students observe and discuss what happens to the glitter. (It floats to the top.) Pour the water and glitter into the plastic cup.

With a marker, draw a line to show the water level on the outside of the plastic cup. Then freeze it outside if the temperature is below 32 degrees Fahrenheit. If not, place in a freezer.

Hand out the 3Doodlers along with the other materials, i.e., cups, water, glitter, spoons, and the Water Observation Sheets.

Circle to assist and assess.

Once they are all completed, please the students' ice lanterns in the freezer or outside if it is cold enough. Once frozen, peel off the cups to reveal the ice-lantern. Place them over a flameless LED to light them up.

Have pairs display and present their ice-lanterns in their frozen states. Discuss the observations: How did the level of the water change? (Frozen water expands.) What happened to the glitter? (Most of it is still at the top.) Share the Doodled-Ice-Lanterns on Twitter. @3Doodler #3DoodlerEDU Complete this investigation by observing what happens when the ice-lanterns melt, and then when the same water is heated (by the teacher) using a hot plate and metal pan. Then refreeze ice-lanterns.

The teacher will assess the students by evaluating their written and oral responses throughout this activity.

Students will illustrates the cause and effect of modifying the temperature of water. The modifications will result in a solid, liquid, and gas. Students will create ice-lanterns using food coloring to explore how adding color affects the outcome or the effects of mixing colors, e.g., red and yellow to make orange.

Students will draw upon prior knowledge about the properties of water and use that information to answer specific questions during this activity.

Students will discuss the properties of water.

Students will build on the talk of others during the whole group and partner work throughout this project.

Plan and conduct an investigation to describe and classify different types of materials by their observable properties.

Students will compare and contrast the properties of water as a liquid, solid and a gas while making ice lanterns.

Next Gen Science
PS1.A: Structure and Properties of Matter

Different kinds of matter exist and many of them can be either solid or liquid, depending on temperature. Matter can be described and classified by its observable properties.

Students will observe water and its properties as a solid, liquid, and a gas.

Heating or cooling a substance may cause changes that can be observed. Sometimes these changes are reversible, and sometimes they are not. (2-PS1-4)

Students will freeze, melt and refreeze water to investigate whether changes to a property of matter, i.e., water, are reversible.

Students will break down the process of exploring the properties of water into a hands-on activity involving doodling a design, immersing it into water, freezing the object, melting it, and then refreezing it.

Students will use a 3Doodler to create an immersive element that will interact with water in its three states, i.e., solid, liquid, and gas.

Students will doodle original designs for their ice-lanterns.

Students will work with a partner and peers throughout all phases of this activity. 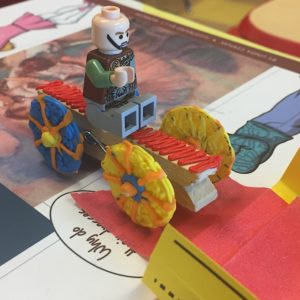 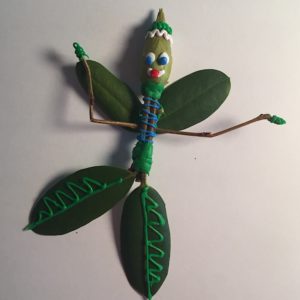