In this lesson, students will work with a partner to doodle 4 different story-stones with nouns. Students will use these story-stones as writing prompts, incorporating them into a simple story with a beginning, middle, and end. 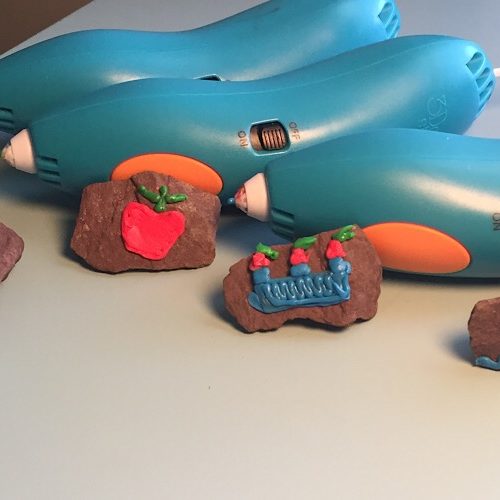 Discuss how a wonderfully, delicious pot of soup was collaboratively created from each villager's contribution. Compare this event to the act of writing of a story, and how it is a collaborative experience that brings forth the best creative contributions of each group member.

Share the goal: Students will work in groups of 4 to doodle the image 1-noun on a stone. Then the students will write a story together using each of their 4 story-stones in their group's story.

Review nouns as a person, place or thing. Have students brainstorm a list of interesting nouns, e.g., a castle, fish, tree, apple, etc.

Model how to doodle a simple drawing of a noun onto the flat face of a stone. Remind students that simpler is better. Note how to affix the doodle back onto the stone if it falls off by welding it on with warm plastic. Have students select 4 nouns and doodle 4 related story-stones.

Project your tablet or computer screen on the board for students to view the Doodle-Story-Stone Template. Model how to fill in the template using the 4 story-stones as elements of the story.

*Note that stories should have some sort of problem. In the example given, the fish is hungry. See the example in the Doodle-Story-Stone Template.

Demonstrate how to title, share with group members and teacher, and write collaboratively on the Doodle-Story-Stone Template.

*Alternatively, the Doodle-Story-Stone Template may be printed to fill in with a pencil.

Hand out 4 stones and 3Doodlers to each group. Have them discuss and then doodle the images of nouns on each of their stones.

Instruct groups to discuss possible ideas for a story that includes all 4 of their story-stone nouns. Have students share their story ideas with you before handing out computers. Assist and guide.

Hand out computers for students to work on a story together. Since 4 students may write at the same time, students may split up the writing with one student working on each part.

*Assign a different color font for each student to check their work.

Have each group share their doodled Story-Stones and read their stories aloud to the class. Share doodled story-stones on Twitter! @3Doodler #3DoodlerEDU *Optional: Have peers suggest revisions.

The teacher will assess the students level of comprehension based on story-stones and stories.

With guidance and support from adults, use a variety of digital tools to produce and publish writing, including in collaboration with peers.

Students will use a 3Doodler to doodle the image of a noun on a story stone. The story-stone that will be used in a collaborative story.

Write narratives in which they recount two or more appropriately sequenced events, include some details regarding what happened, use temporal words to signal event order, and provide some sense of closure.

Students' group stories will incorporate a logical sequence of events, i.e., first, next, then and last.

Students will break down the process of writing a collaborative story using a 3Doodler, nouns and a story template.

Students will use a 3Doodler to create a tactile model of story-nouns.

Students will doodle story-stones to be used in a collaborative writing piece.

Students will confer with a partner and whole group throughout this activity. 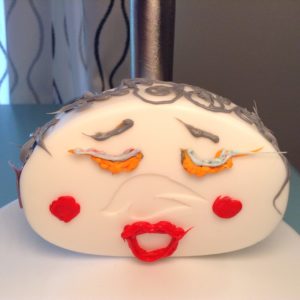 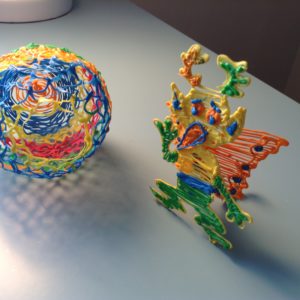 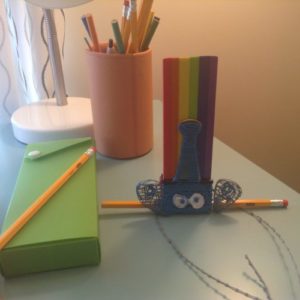