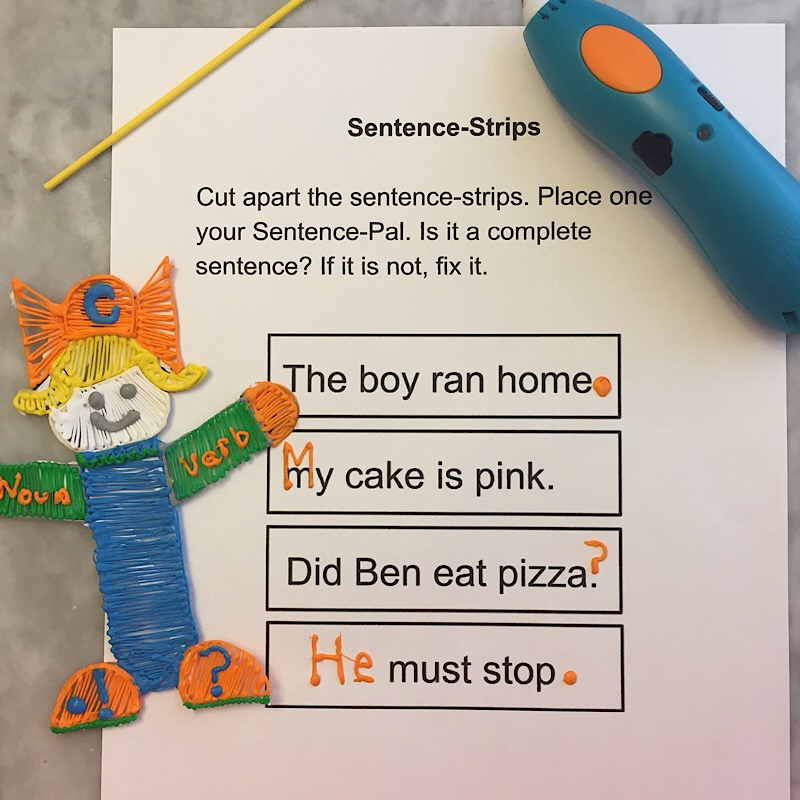 *If you are using foam board strips for Sentence Pal bodies, precut 1 1/2" x 4" strips, one strip for each pair of students.

Whole group: Project your tablet or computer screen on the board for students to view the Doodle Sentence-Pals and related poem from the Sentence-Pals Worksheet.

Read the Sentence-Pal poem aloud. Then have students read it along with you. Discuss the parts of a sentence, e.g., capital letter, noun, verb, and punctuation.

Model how to doodle a Sentence-Pal. Segment off larger fill areas to make doodling easier. *To save plastic, use foam board strips for the body and weld head, arms, and feet to it. Allow students to embellish with 3Doodler, adding belt, necklace, watch, etc. Doodle a rectangle as a stand. Weld Sentence-Pal to stand.

Note the parts of the Pal, i.e., capital at the top of the head, noun and verb in the middle, and punctuation at the feet.

Hand out 3Doodlers and one Sentence-Pals Worksheet to each pair. Circle to assist as students doodle. Students can personalize their Doodle-Sentence-Pals, but must include the symbols and words that identify parts of a complete sentence.

Hand out the Sentence-Strip Worksheet for students to cut apart sentences and dress up their Doodle Sentence-Pals. They will then use the 3Doodlers to make any corrections needed.

As a whole group, review the Sentence-Strips and then instruct students to use the blank sentence strips to write their own complete sentences. Instruct them to doodle the capital letters and punctuation.

Students will write their own rhyming or non-rhyming poem about their Sentence-Pal.

Demonstrate command of the conventions of standard English grammar and usage when writing or speaking.

Students will recognize when subjects or verbs are missing from the sentence-strips. Students will include a subject and a verb when writing their sentence strips.

Print all upper and lowercase letters.

Demonstrate command of the conventions of standard English capitalization, punctuation, and spelling when writing.

Use end punctuation for sentences.

Students will use the 3Doodler to doodle Sentence-Pals, which are used in the process of checking and correcting sentence strips.

Students will use a 3Doodler to personalize their Doodle Sentence-Pals using selected colors and designs.

Students will seek feedback from a partner during all stages of the process for this activity, and the extension activity. 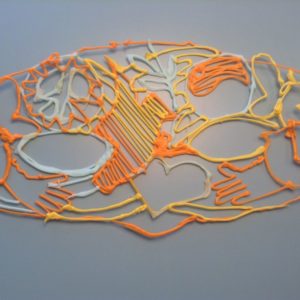 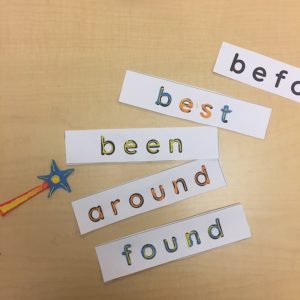