Students will work in pairs to graph Parabolic Curves over 4 quadrants of an x- and y- axis, and then create a series of conjectures about Parabolic Curves based on their measurement of lines, angles, symmetry and patterns. The resulting product will be similar in appearance to string art.

Whole group: Challenge the class to create a curve from a series of straight lines using bamboo or any type of wooden skewers.

After giving students some time to practice, introduce them to the concept of a Parabolic curve.

Share the goal: Students will create a curve from a series of straight lines using a pencil, ruler and graph paper.

Model how to do it. Project your computer or tablet screen on the board and display Parabolic Curve Template A. Use a ruler to draw straight lines to connect like numbers on each pair of axes. Show students how to draw a line from number 1 on the x- axis to number 1 on the y- axis. Do the same for each pair of numbers.

Demonstrate how to use the 3Doodler to connect point to point. When creating a new line, anchor it to the graph paper, then lift the line gently and extend it to the next point anchoring it before ending it. Use a 2-3 color pattern for aesthetics. Allow plastic to harden. Peel off graph paper and adhere to contrasting color construction paper background with double-sided tape or by welding it to the paper with 3Doodled beads of plastic.

Instruct students to observe patterns, angles and lines of intersection. Record their observations on the board.

Divide students into pairs. Hand out one copy of Parabolic Curve Template A to each pair. Hand out protractors and rulers. Instruct students to measure lines and angles as they work. Tell students to record their measurements and observations.

Ask students to come up with a conjecture or rule to explain how to form a Parabolic Curve. Ask: "What do we know to be true?" "Do you need a maximum or minimum number of lines?"Help students understand the following: All lines must be straight. All lines must intersect each other at a 90º angle.

Rather than share assertions about parabolic curves, lead students to conjectures through an effective line of questioning.

The teacher will assess students’ work based on their final products, as well as each student's participation in the group discussion.

Animation of Parabolic Curve Template A

Animation of Parabolic Curve Template B

Students will form conjectures about Parabolic Curves based on observations and measurements.

Students will analyze and evaluate by creating a concrete Parabolic Curve with a 3Doodler.

Look for and make use of structures and patterns.

Students will note the structures and patterns of Parabolic Curves through measurement of lines, angles and observations.

Generate and compare multiple possible solutions to a problem based on how well each is likely to meet the criteria and constraints of the problem.

Students will generate and compare multiple 3Doodled Parabolic Curves in order to draft a series of rules and conjectures.

Students will break down the larger problem of drafting a series of rules and conjectures for Parabolic Curves by 3Doodling, measuring and observing their concrete models.

Students will use the 3Doodler to visually demonstrate the the relationship between lines, angles, symmetry and patterns in Parabolic Curves.

Students will demonstrate willingness and competency within an open-ended task that has more than one possible outcome.

Students will use a 3Doodler to design a series of Parabolic Curves.

Students will use a 3Doodler with a partner to complete a series of Parabolic Curves. 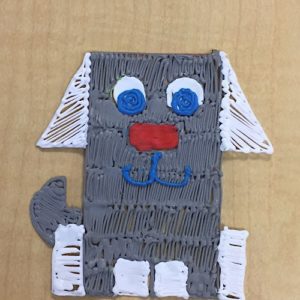