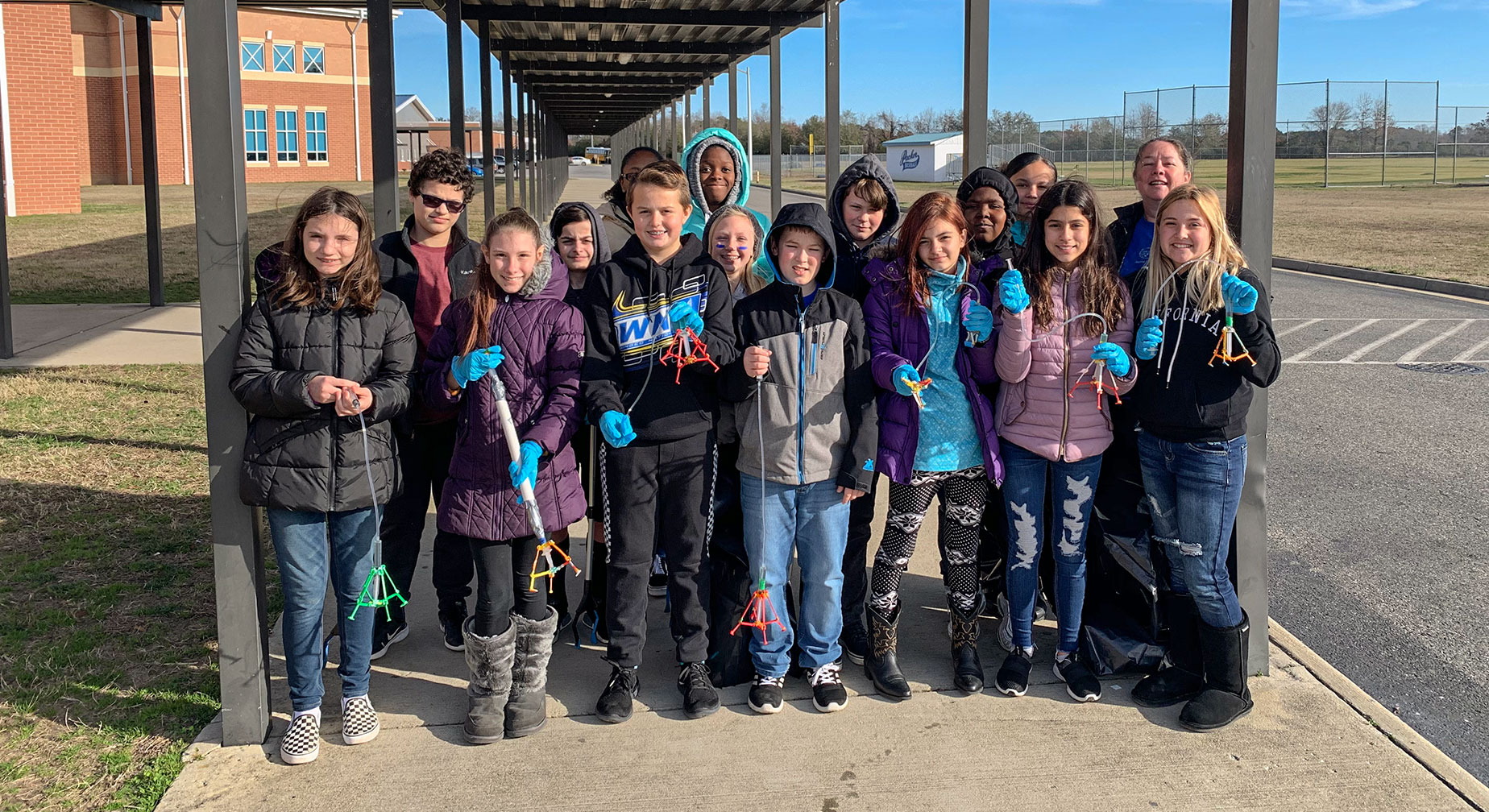 Helping students develop ideas and create things is such an important process. Oftentimes I find my students will not take the risks involved in inventing new things because they have never learned about prototyping. They’ve often never been encouraged or allowed to truly explore the process involved in bringing great work to life. With that as my goal, we started working with 3D printing to create hydraulic claws.

"“Oftentimes I find my students will not take the risks involved in inventing new things because they have never learned about prototyping.”" Share

I introduced my students to 3D printing using 3Doodler Start pens. First we played with them, doodling our names and building small characters or logos that the students wanted to create. Soon, we moved on to using molds to create the parts of hydraulic claws.

My students didn’t know anything about hydraulics so we took a small detour in our process, got out some tubs and buckets of water, a few pieces of aquarium hose, and some syringes and figured out how water could be used to push a syringe plunger up while we pushed the connected plunger down.

This led to more than a few conversations about how we used that in real life – the brakes on cars, the lifts on our adjustable stools, and heavy machinery like cranes at our local shipyards. After exploring that, we went back to assembling our claws. The first claw that was assembled was used to pick up a piece of trash on the classroom floor. It worked!

After several class periods of exploration, we decided we needed a way to test all of our ideas, so I posed the question, “What could we do to test our inventions?” It was a student’s idea to pick up the trash we could see right outside our window.

Given the opportunity to brainstorm, they realized that their ideas would be taken seriously and they turned their attention to solving a problem we’d been hearing about in our local community… litter along our roadsides that was ugly, messy, and causing a multitude of problems. The students asked, “Could we pick up the trash outside to test our claws?”

"“Given the opportunity to brainstorm, they realized that their ideas would be taken seriously and they turned their attention to solving a problem we’d been hearing about in our local community.”" Share

That led to picking up other, heavier items and a race to finish more claws. After a few items were picked up, one claw broke. That brought about the process of repairing and improving each version of the claw, only now the kids wanted to know if bigger syringes worked better, if additional “fingers” on the claws would make for better claws, or if there were better materials for making the claws into sturdier tools.

We talked a lot about how other people’s ideas gave us more ideas of how to improve our own work and how, even if an idea didn’t work, it gave us more ideas. Several students took their ideas to more precise methods, using TinkerCAD and our 3D printer to manufacture parts.

Soon we moved away from just creating claws to adding handles and activation buttons to improve our inventions. Each time a new idea was proposed, I tried to make sure materials were available to make that idea possible. I didn’t know if their ideas would work (and often, I was sure they would not) but we tried to build them anyway.

When the project was over, students were surprised to discover they would be receiving grades for their work! They brought up the fact that not one of our homemade claws was still intact. Did that mean they would get a failing grade?

This led to a discussion about the importance of the process, and not the final product. Most of my students felt they had learned more from their mistakes than their successes! Many of them realized they got new ideas when something failed – not when something worked.

For teachers interested in recreating this project, I think it is important to understand it is a process that takes patience and time to explore. The time investment was well worth it for the learning that took place. Having lots of materials on hand was helpful, as was having professionally created “trash pickers” that students could look at for ideas.

Probably the most important thing I would recommend is making sure to build a claw and go through the process that you expect your students to go through. That experience was priceless in helping students to problem solve.

Want to replicate this in your learning environment?

Use our free hydraulic claw stencil to get started, or check out our 3Doodler Start Science and Engineering Activity Kit, which includes everything you need to make a hydraulic claw. You can watch a complete video tutorial here.