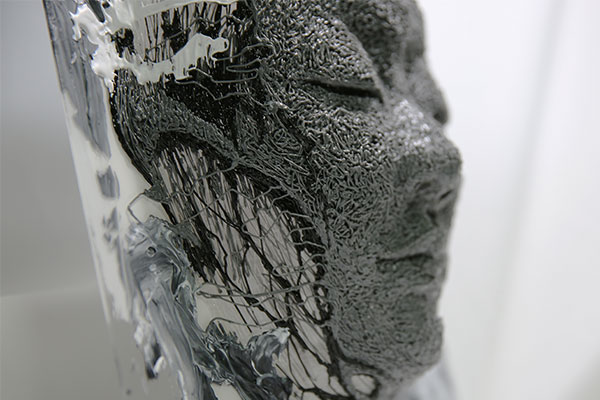 South Korean artist KIMONE shows the hidden side of human emotions with her digital art. Now she’s looking to push her art into a new dimension.

“The first thing I Doodled was my name on paper,” KIMONE says. But using the 3Doodler was different than other media she had used in the past. “Those words were written badly and I felt pretty awkward,” she admits.

But feelings and emotions, especially those related to insecurity, are what KIMONE’s artwork is all about. Her series “HIDE” was inspired by her experience in therapy.

“During therapy sessions, I looked at myself through the person sitting in front of me,” she says. “The enclosed area where I had the sessions was not a space for me to be comfortable in, but instead put me under pressure.” Even though the therapy sessions were meant to encourage openness, KIMONE says that for her it made her want to cover up even more. “Every moment, I tried to hide,” she says.

With the 3Doodler and branching out into 3-dimensional art, KIMONE’s artwork turned from hiding to expressing. “I have been working on the natural human body and very basic human emotions,” she says. “I wanted to express the extended concept of a human face that shows abstract feelings and emotions.”

Using the 3Doodler allowed KIMONE to explore new avenues in her artwork. “Doodling enables me to represent all kinds of abstract images,” she explains. “And Doodling has a special virtue in that you can use mixed medium and vary from 2D to 3D.”

"Doodling has a special virtue in that you can use mixed medium and vary from 2D to 3D." Share

Now KIMONE plans to continue using the 3Doodler for bigger projects. “I would like to express the human body in more detail,” she says. “I look forward to creating structural sculpture by using parts of the human body.”

KIMONE says she recommends using Overhead Projector film paper for Doodling. “It’s good for practicing one’s writing and also the letters can be separated into pieces more easily,” she says.

KIMONE says her 3Doodled face was the most intense work she has done with exploring the human form in 3D. She worked on her sculpture for 10 days, working five to eight hours each day. “It is a great pleasure for an artist to feel emotion easily through their work,” she says. “This artwork made me feel this.”