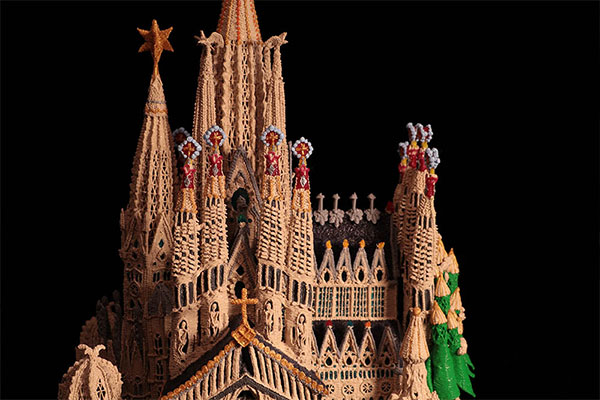 We have seen members from our creative Community do incredible things, from art to fashion to full-size cars. Cornelia Kuglmeier has been a dedicated member of our 3Doodler Community from the very beginning, and last year took on a project that required the precision, attention to detail, and artistic ability that only she could bring.

“I like big challenges,” says Cornelia Kuglmeier. A school teacher from Germany, Cornelia has worked with 3Doodler on incredible artistic pieces in the past. But earlier this year, Cornelia completed her largest and most detailed project to date: a scale model of the Sagrada Familia. Laying out the facade

Designed by Spanish architect Antoni Gaudi (1852-1926), the Sagrada broke ground in Barcelona in 1882 and remains unfinished to this day. In addition to the immense complexity of the building, the completion of the Sagrada was made even more difficult with Gaudi’s sudden death, after which his notes were lost for many years and then later partially destroyed by anarchists in 1936.

"I’m a big planner. I just don’t Doodle without a clue on how to begin and how to move on from each point" Share

To recreate the Sagrada, Cornelia researched Gaudi’s design plans extensively as preparation for creating her model with the 3Doodler.

“I’m a big planner. I just don’t Doodle without a clue on how to begin and how to move on from each point,” Cornelia says. “So I first did some very long and some very detailed research. Then I made myself stencils where I counted on heights and relations on the different parts, and even drew in some decorations to see how much space it would take.”

“Gaudi had a very unique idea of building and architecture,” Cornelia explains. “You basically have the outer structure of a Gothic church in the Sagrada Familia, but the sustaining structure on the inside is completely different from what we know of the Gothic epoch.” To add to the complexity, nearly every aspect of Gaudi’s architectural design was new and unheard of. “He designed the curved towers by building what he called a ‘hanging model’,” Cornelia says, describing how Gaudi hung ropes weighed down with sand bags to create curved lines for the shapes of the towers. “Their shape, modelled on parabolas, was Gaudì’s way of creating self-supporting structures that would overcome the faults of Gothic architecture.”

Innovative aesthetic twists also provided special challenges to the original builders. “The most difficult part of construction on the real Sagrada was the sustaining structure in the naves holding the roofs and towers,” she says. “Gaudi wanted the pillars inside the church to be shaped like trees with branches, supporting the arches and symbolizing the leafy roof of a forest. Such a system of pillars and arches had never been built before.”

Gaudi’s genius and innovation meant a slow construction process. “I think one of the reasons it is not finished now is because the technique was very different and they had to go step by step to invent it,” Cornelia says. “And it’s huge. It’s meant to be the tallest Christian church when it’s finished.”

But Gaudi was never in a rush to see the Sagrada Familia completed. “It was obvious back then that he would not live to see his project finished,” explains Cornelia. “But when they told him that, and asked if he wanted to simplify some things or stick to knowledge they had already about architecture, he said he wouldn’t change anything because his client had all the time to wait, and wasn’t in a hurry. He meant God of course.”

While the Sagrada Familia is planned to be completed in 2026 (144 years after it first broke ground), Cornelia’s Doodled model took only four months – although with its own unique challenges.

The first major challenge was researching the plans of Gaudi’s original design so the model could stay as close to his vision as possible. “The original ground plot and floor plan was essential,” she says. “Without it, assembling and planning would not have been possible. The main structure is a so-called “latin cross”, the church itself is some sort of modified Gothic style. As those are very strictly planned, the original ground plot studies were very helpful.”

But other parts of the design plans were more difficult to research.

The finished Sagrada will have three detailed façades depicting different chapters from the life of Christ. Cornelia wanted to include as much detail on each façade as possible. “This was complicated though, as only one façade is fully built, the Nativity Façade,” she says. “I could not find a photo of the fully built Passion Façade, so I had to stick to models, which are sometimes slightly simplified.”

"The figures were so tiny. I had to simplify some areas, and reduce others. Some things I had to invent" Share

“The Glory Façade was completely built after model views. What made my work so difficult was that there are actually at least two models; one very colourful, highly decorated model, supposed to be made by Gaudi himself, but only available in very small picture sizes; and one white, rather even and slick 3D-printed model.” Cornelia decided to rely as much as possible on Gaudi’s own model. “I chose to use green for the turrets in the Glory Façade instead of brown, as the model made by Gaudí himself showed the turrets in green,” she says. “I tried very hard to give every façade as much decoration as possible to give it its typical look; I also tried to put as much decoration as possible onto the towers, but this was limited with both, as the figures were so tiny. All in all I had to simplify some areas, and reduce others. Some things I had to invent, like the decoration of the apse – it’s not built yet, and there was no picture to be found that depicted it big enough.”

Working up to 10 hours a day, and eventually using 1,050 strands of plastic, Cornelia’s Sagrada Familia model began to take shape.

“I didn’t count how many times I wanted to throw it against a wall,” Cornelia admits. Even when working with stencils and detailed research, mistakes can still happen, and with a project as precise as the Sagrada Familia, even a millimetre difference could throw off proportions and make assembly difficult. “I Doodled all the parts first, put together the towers, the facades and the church naves and then started assembling from the middle – Christ’s tower – in each direction,” Cornelia says. “Having them all at the right height, sitting straight and at the right angles was very difficult; besides, as organic forms meet geometric forms, putting the pieces together was not always easy, or the form itself grew so edgy that my hand with the pen almost didn’t fit in.”

And sometimes Cornelia had to get creative to make sure the church came together properly. when assembling the towers, she found space too tight to Doodle from the outside, and the structure was too delicate to lay it on its side without risking damage. “So when I had to assemble this part, I gently pushed it half over the edge of my table – just enough so it wouldn’t fall down – and I kneeled under it and Doodled the whole thing upside down, like Michelangelo painting his Sistine Chapel,” she says. “It didn’t take me as long as Michelangelo though, and I didn’t go blind,” she adds, laughing. The Devil is in the Detail

For Cornelia, the most important part of her Doodled model was making sure to include as much decorative detail as she could, even when it came to creating the angels on the facade. “It wouldn’t have that impact if it was just plain or only had bits and blobs,” she says. “That was the most delicate work. I was sitting there and forming the hot plastic with pincers to make them even thinner or make some sort of gap between the head and body to keep them as small as possible but visible.”

“I also oven-baked the windows, trying to give them their real colors, making them smooth and shiny in contrast to the brown and rough appearance of the church’s walls,” she says.

"I wanted to finish it. I saw it growing, and it was not in vain" Share

Despite the frustration and hours of dedication to both research and construction, Cornelia says that once the pieces began to come together she felt the whole ordeal was worth it. “I wanted to finish it. It was a big challenge, and I like big challenges,” she says. “I saw it growing, and it was not in vain.”

To learn more about Cornelia, check out her profile at 3DoodlerPRO.com. For more images head to this fantastic piece on designboom.