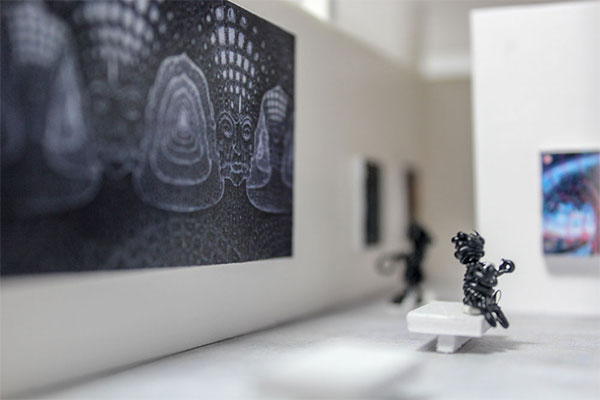 Breathing life into an otherwise static scene is a challenge faced by every designer, architect or engineer in their daily work. “How can I convince my client that this town layout, building, museum or gallery will be enjoyed by real people going about their everyday business? And how can I bring hallways, auditoriums, and city streets to life with little more than an uninhabited scale model?”

To answer this question, Nikka Francisco, undergraduate at the Savannah College of Art and Design and 3Doodler design intern, takes us on a tour of a gallery teeming with Doodled life.

The gallery was created as a part of a course in 3D Design Form & Space, essentially a foundation course in how to think in 3D. The aim of the course is to think in different ways about installations and sculpture, creating models for presentation to others. Students have struggled to show how their ideas would work in reality, which prompted me to think a little differently, adorning the walls with the works of American Artist Alex Grey, and filling the gallery with a series of unique Doodled people.

Most of the time people purchase small sculpted models, but I wanted to make this my own personal work, even the people inside the gallery. The other problem with pre-made sculptures is that you can’t really change them – they are fixed and they aren’t designed for your specific space or experience.

Using the 3Doodler, things happen that you don’t always expect. You can’t always control the way the plastic flows, but that lack of predictability can often be more realistic. In some parts of the gallery it looks like the people are actually in motion, reacting to things, and it gave a better sense of relationship between the person and the artwork they were looking at.

I didn’t plan out who would go where at the start. Instead I Doodled a small army of people and then placed them in different parts of the museum, in positions that fit best, moving them around until it felt right. On placing the people inside, it started to feel like an actual gallery, and that the space itself was possible.

You have the two people in the lift peering out through the glass; your typical gallery poses – some people striding by, while others sit and stare at a painting for hours; and then those taking a time out out in the Cafe. Most of the people actually look like they’re dancing!

When I presented the work the reaction was surprise, but positive surprise. 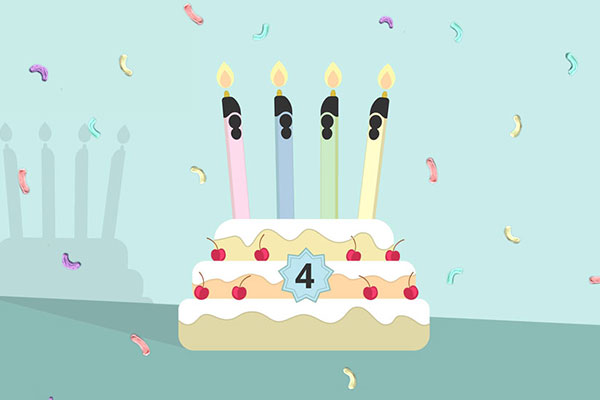 Disruption is a word we hear more and more. Uber disrupted transportation, Airbnb changed the way millions of people book accommodation the world over, and social media has altered the way we interact with everything from friends to news. This theme of disruption and reinvention lives at the core of 3Doodler, a company that is built on the strength of our community and your never-ending support for our work.

As we hit our pen’s fourth birthday, we wanted to take a moment to celebrate with four stories of disruption and reinvention that made our journey possible, many of which started with you!

From one disruptive technology to another

3Doodler began with a mistake—a 3D print gone wrong. Back in 2012 we were a two-man band, inventing toys—anything that could be a hit—and licensing them to much bigger companies. Our go-to tool for creating new concepts was our 3D printer, an invention which is still disrupting industries large and small. The printer we were using missed a line in our print, leaving a glaring hole in our latest model. The print would have been unusable, wasting valuable time and materials.

That’s when inspiration hit: what if we just took the head of the printer off and filled in the gap?

And so, unexpectedly, disruption bred yet more disruption. The 3Doodler was born. We had the idea, but without a community of users it would have ended there. Enter Kickstarter, and our community of visionary early adopters. Relying on the power of the internet, and our hope that you would recognize the potential of the 3Doodler (or just want to have fun with it!), we launched our campaign.

The result was one of the most-funded technology Kickstarters of all time, and a 25,000-strong community to join this amazing journey. A decade ago we would have been asking for money, pleading with retailers to take a chance on us, and most likely seen our dream end in disappointment. With community-led crowdfunding, this paradigm has been turned entirely upside down. More than a passing fad

Disruption is only good until it is disrupted itself. We have made it a mission to ensure that whatever comes next, it comes from us. Most importantly, while we’re on our way there, we’ll do all we can to keep you engaged and inspired.

That very much speaks to our focus on growing a vibrant and engaged community (more on that soon!) as well as the wide product universe we have created around 3Doodler—ensuring you have every color of plastic you could need, as well as all kinds of accessories to help bring your ideas to life. Now with three pens in our product range—the 3Doodler Start, Create, and PRO—there is a pen for everyone, ages 8 through 80, hobbyist or professional, and we’re not stopping there! A special mention to the 3Doodler Start, the little pen that could. Three years in the making, and as a newcomer to the highly competitive toy market, we wanted to get this one really right.

To do that we had to develop our own plastic, stubbornly insisting that it be biodegradable, and melt at impossibly low temperatures. We were also going up against a growing tide of tech-connected toys with a pen that is entirely (and proudly) “unconnected”.

The result was amazing, with the award-winning Start kicking butt at retail, and our whole team glowing at the amazing things made by our new community of young creators. Bye bye screens, hello drawing in 3D! It’s humbling to stand here after four years, with an amazing team of over 30 talented people around us, on course to hit our millionth pen in the next few weeks. Thank you all for helping us on this journey, and we hope to provide many more disruptions in the years to come.

Sincerely and with thanks, 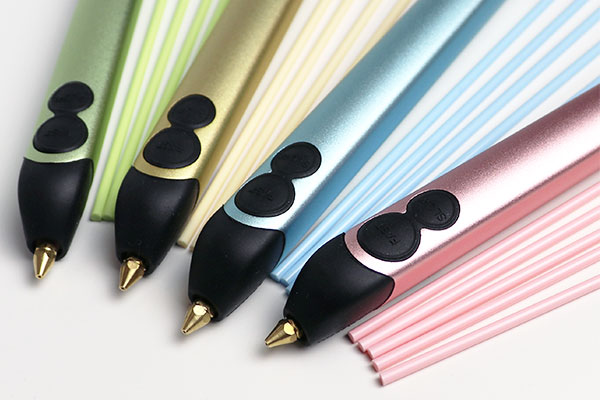 Last year we went bold and bright with our four Create colors. For 2017, we decided to go a different route.

With a perfectly pastel palette, our brand new Create colors are designed for those who prefer subtlety and sophistication to match their creative personalities.

Cold winter weather is no reason to feel blue, especially with our new Powder Blue 3Doodler Create! Soft and subtle, this new color is perfect for daydreaming of clear spring skies to let your imagination soar.

Blue is constantly one of our most popular colours, and we have a full range of shades in our store to keep you Doodling: Get a Rosy Outlook

We know all that glitters isn’t gold, but our new Rose Gold pen will have you Doodling your own creations worth more than any shiny metals. Match all your accessories with the most popular color of the season!

Want to create Doodles that will tickle you pink? Check out these shades available from our store: Green is great with our new Hint of Lime Create. Whether you’re dreaming of spring or looking for a color choice to reflect your environmentally-friendly outlook, this pastel green pen is perfect for making a statement.

Check out these complimentary shades of plastic from our store for Doodles that will make others green with envy: If you’re looking for a pen to match your sunny disposition, or a personality as sweet as sugar, look no further than our new Butterscotch Create! Show off your shining personality as you Doodle happily away.

Make your Doodles match in mellow yellow or glittering gold with this selection from our store: Be sure to show us your Doodles, creative spaces, and how your 3Doodler reflects your personality by tagging us @3Doodler and using #3Doodler and #WhatWillYouCreate 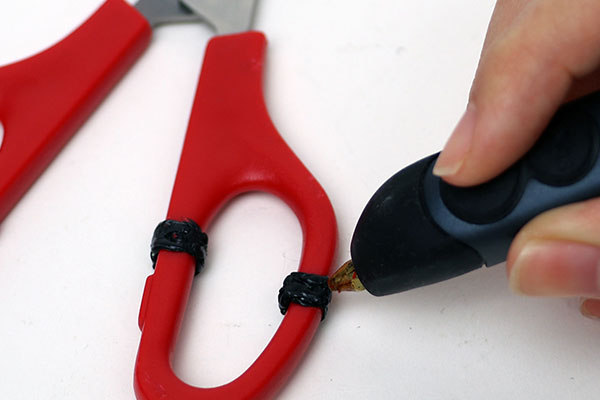 When it comes to the things we use most around the home, small breaks are bound to happen with the general everyday wear and tear of life. It’s unavoidable, but that doesn’t mean it’s not fixable!

With your 3Doodler in hand, you can DIY your own fixes and repairs for all sorts of breaks and damages that can happen around the house.

It’s tragic when an otherwise great tool is wrecked by one little bit of broken plastic. That’s what happened to these scissors. While the blades are still fine, they won’t work properly when the plastic handles are broken.

Fortunately that’s a quick fix with the 3Doodler! To fill in the cracks, PLA will create a strong, solid hold. You can also weld the plastic together with the Create’s hot tip. Using a combination of both will give a lasting solution that will make your scissors stronger than ever. 2. Saving a Stand for the Kitchen

When this cutting board stand started to crack, it looked like the end for this handy storage unit. What good is a stand that won’t hold up?

Luckily all it took was a bit of repair work with the 3Doodler to make it like new – and possibly even stronger than before! With added PLA plastic which welded and reinforced the stress points of the stand, it can now continue to hold up under constant kitchen use.

There’s nothing more frustrating than a broken zipper. Whether on a bag, jacket, purse or any other zip-able item, you need that zipper to do it’s job!

Fortunately, there’s this handy fix and video tutorial from Creative World to help you Doodle your way back to a fully functional zipper.

4. A Doodle DIY for Your Deck A quick Doodled replacement makes this home repair a snap!
The plastic ring that hold the umbrella in place on this deck table kept breaking. And a wobbly umbrella can upset the whole balance, and ruin an afternoon outdoors!

Fortunately, all it takes is your 3Doodler and a bit of measuring, and you can create your own custom ring that withstand even more wear and tear than the original. You can use ABS or PLA to create the ring, and could even add some FLEXY around the bottom and inside to give it a non-slip upgrade!

It’s the repair that sparked the whole idea for the 3Doodler: what do you do when your 3D printer misses a line, or a 3D print breaks or cracks? Fill it in using your very own hand-held 3D printer, of course!

The 3Doodler is perfect for fixing damages or accidents that can happen to your 3D prints. Don’t waste the time and effort involved in 3D printing, just make a quick repair and you’re good to go.

Using a @3Doodler pen to fill gaps on my larger assembled #3dprint. Messy but does the job #technology #repair #maker #process pic.twitter.com/mIKAK5l9BW


With so many options to fix and repair, the 3Doodler can save not only your tools and home items, but can also save you lots of money by avoiding costly replacements!

Not sure where to start when it comes to using your 3Doodler around the house? Check out our Hot Tips section to get insider ideas on how get the most out of your 3Doodler, and have you Doodling like a pro.