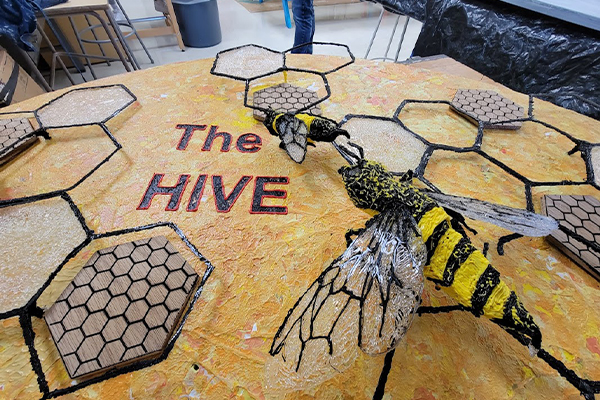 This week we caught up with Michael Jaber, a Coordinator of Instructional Technology at Sheboygan Area School District in Wisconsin, to learn more about a multi-faceted project his high school students recently took on. 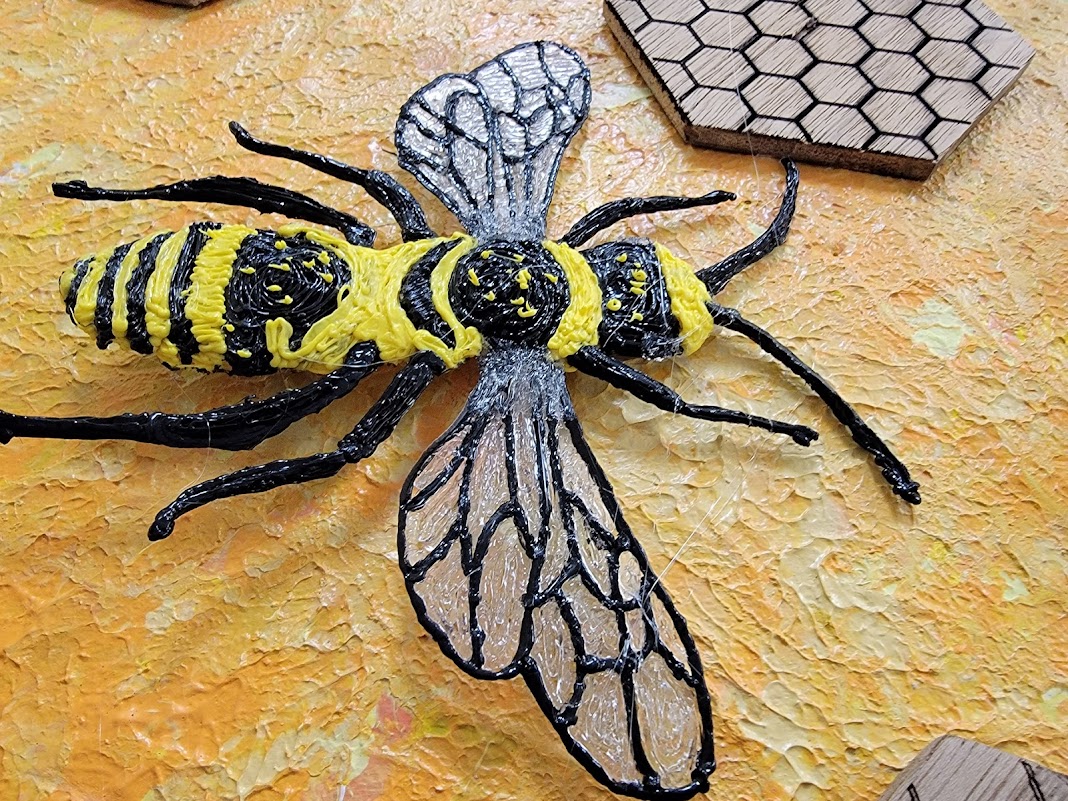 Their goal was to construct a sculptural wall hanging for the new Technology Department, for which they used 3Doodler 3D Pens to complete.

So, join us as we learn more about the project, and how this district is incorporating technology into its programs, classes and curriculum.

Sheboygan South High School offers a rigorous curriculum with a variety of opportunities to prepare students for careers, citizenship, and life.

The school is located along the shores of Lake Michigan in Sheboygan, Wisconsin with a student population of 1,184 students.

One thing that sets this school apart from other schools in the area is its Art Department, which has been experimenting with infusing technology into the art curriculum to allow for alternative representation of visual creation and expression.

The Technology Department at Sheboygan Area School District recently moved offices to an alternative location and asked the South High Art Department to create a sculptural wall hanging as the focal point for their offices called “The Hive.” 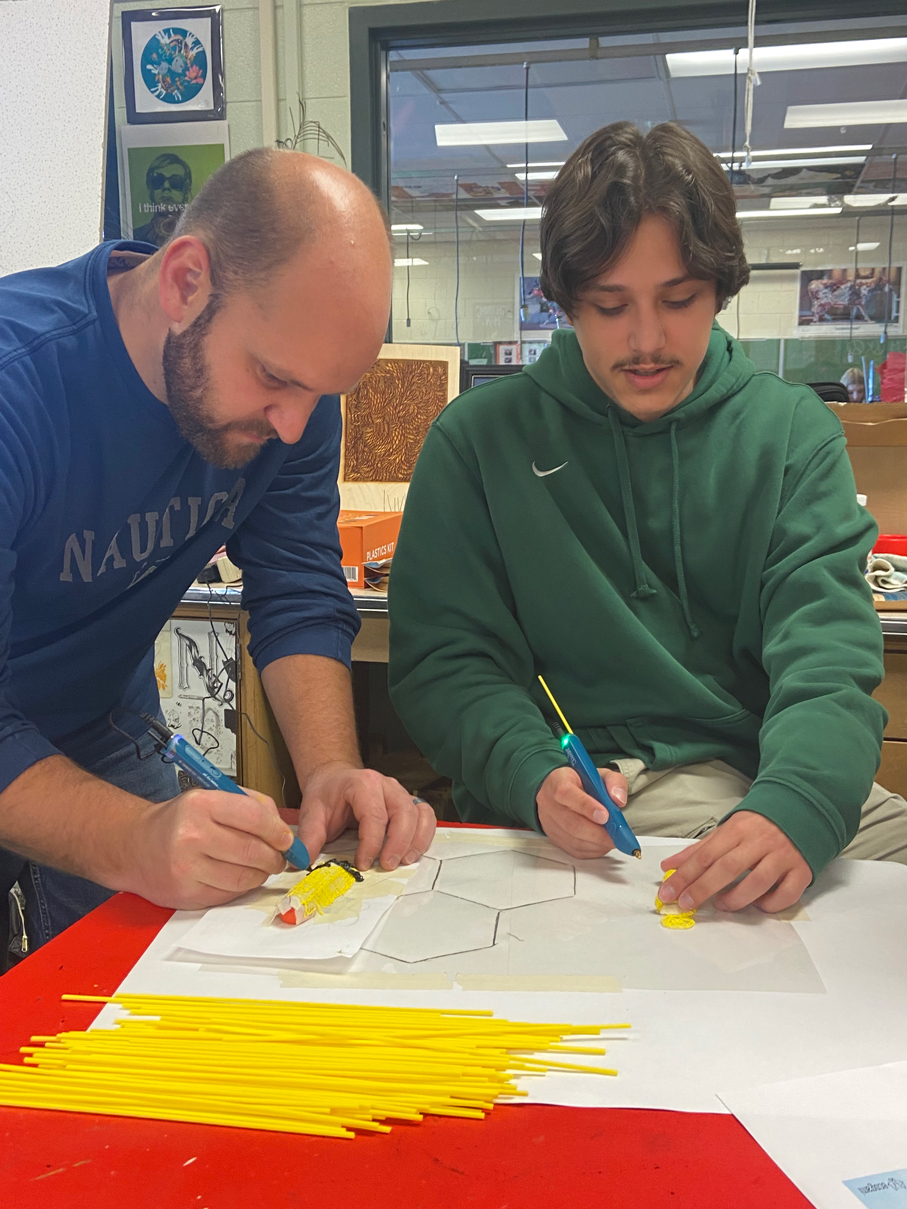 In the early planning stages, IT Coordinator Mike Jaber and Innovation Coach Amy Dekker met with Art Teacher Brian Sommersberger so that we could share and benefit from tech devices commonly used throughout our district, including our 3Doodler 3D pens, Sphero robots, and the Glowforge Laser Machine.

After demonstrations were given, students began to collaborate and brainstorm ideas for what “The Hive” would look like visually. Since the sculpture is intended to be a conversation piece, one criteria students had was to incorporate some of the hands-on technology the district uses.  IT members can now reference “The Hive” and explain how specific hands-on technology solutions are used to create unique works of art.

Can you tell us more about “The Hive”?

Students began “The Hive” by painting white primer on a 4×8’ sheet of styrofoam intended to be the base for the project. Once dry, the sheet of foam was placed on the ground, and paper wall barriers were placed around the edges in preparation for the Sphero robot balls.

Students dipped the Sphero Balls in acrylic paint and controlled them with iPads to simulate action art painting, most commonly referenced by artist Jackson Pollock.

After the paint dried, a 4-foot circle was cut out of the foam and ready for 3Doodler pen creations. Students used the 3Doodler 3D printing pens to first create honeycomb shapes consisting of 3 hexagon shapes attached to one another.

To make honeycombs uniform, a template was placed under a transparency sheet which allowed the shapes to peel off easier. 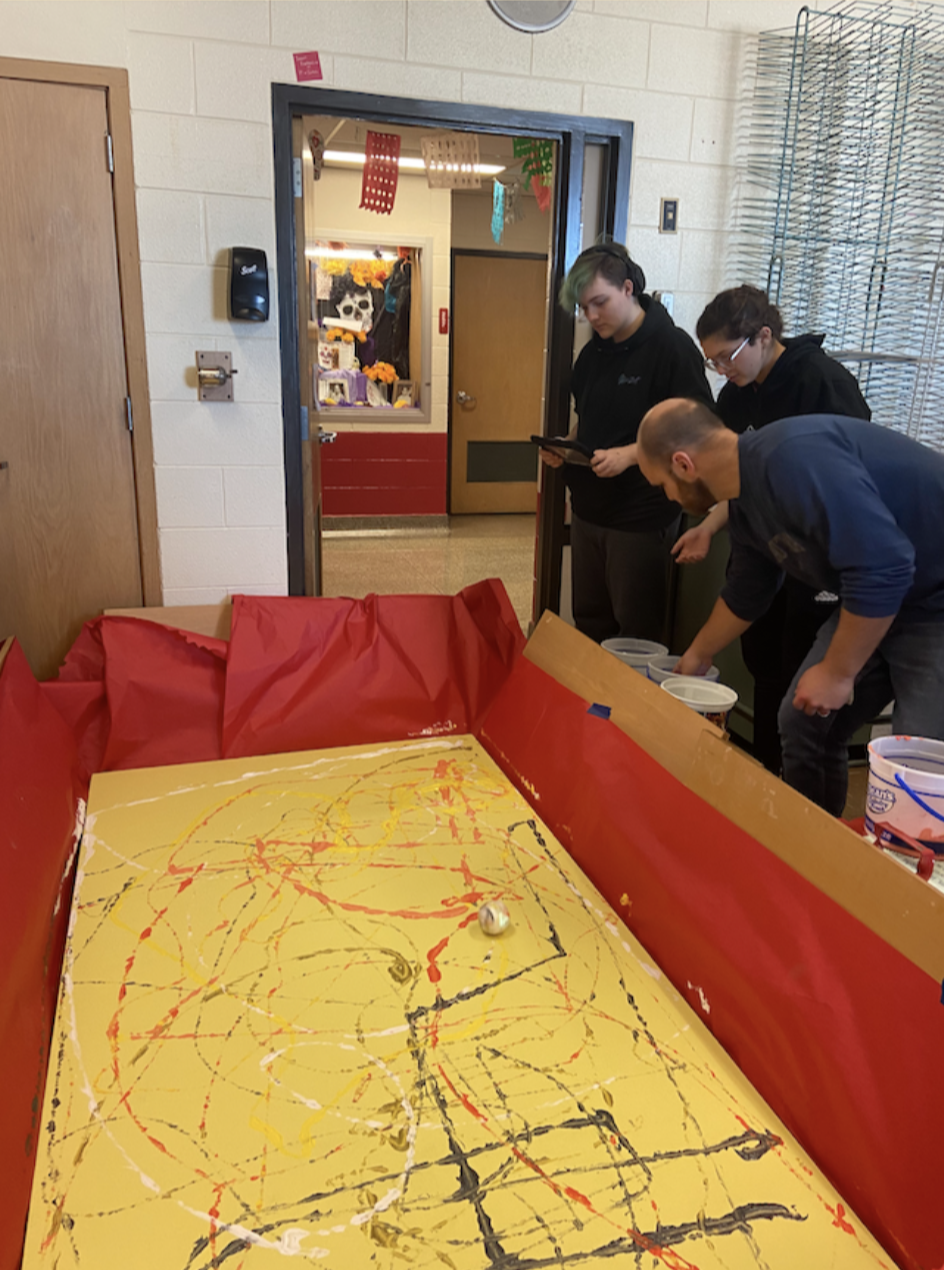 Students were also required to attach a paper clip to the backside using plastic filament instead of hot glue. Another group of students were asked to help make the 7 bees seen on the hive, each representing a member of the IT department. 3Doodler filament was doodled and molded around found objects such as glue sticks, to form the body and the head of the seven bees.

Each part was created separately and welded together using additional plastic filament.

Lastly, students in Gary Scheller’s tech-ed class used the glow forge laser etcher/cutter to create honeycomb shapes to be placed inside and around the 3Doodler components.

When did you add 3D printing pens into your curriculum? And how did you get introduced to 3Doodler?

The South High Art Department was introduced to the 3Doodler from the Instruction Technology Department only 3 months ago.

These pens have been around the district for several years and utilized during our Tech Clubs at the upper elementary schools. We had the 3Doodler Start Learning Packs initially and eventually graduated to something more sophisticated like the 3Doodler Create+ Learning Packs.

It was time to introduce these to the upper-level art classes and let them run with this type of technology. They were so popular, we ordered some 3Doodler Create+ pens just to keep in this particular art class.

Do you have any suggestions for people new to 3D pens?

The South High Art Department is always looking to explore and beta test new opportunities with technology. We are beginning to review State and National Standards to see how the 3Doodler pens fit into current standards and curriculum.

As a teacher, I am open to choice-based learning and modifying projects where the 3Doodler pens could be applied in place of a different material such as graphite drawing or painting. Some suggestions I tell students right away when beginning a project is to draw on transparent sheets to help the filaments peel off with ease. I also tell the students to use the pens like a wire welder when constructing sculptures.

The filament coming out of the pen is very similar to a wire welder and I could see the pens being very useful in trade schools where students are learning different types of welds. I have seen the most success when students are using a template to begin a design. Once a foundation is constructed students can then use their artistic expression.

The 3Doodler pens are very therapeutic from the sound of the pen to seeing the filament come out the tip of the nozzle, and most students along and staff have found the pens very addicting (in a good way). Once you pick one up and get started, it’s tough to put it down!

Don’t forget to share what your school creates with @3Doodler #3Doodler #WhatWillYouCreate. 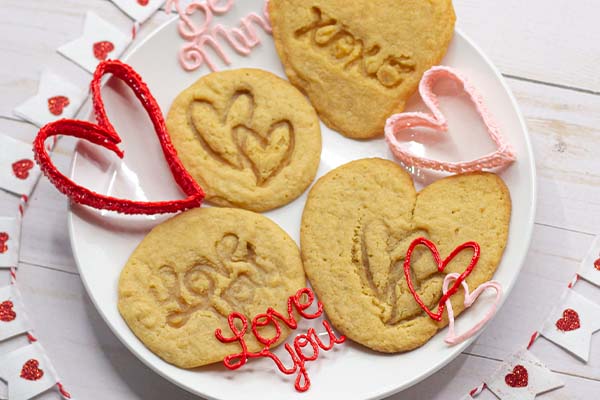 What sweeter way to surprise that special someone than with a handmade gift? Not only will these ideas mean more, but they also won’t break the bank (sorry Hallmark). Because let’s face it, chocolates, roses, off-the-shelf cards, and oversized teddy bears are all so cliche.

Whether or not you celebrate big on February 14th, we’ve pulled together some fun heartfelt Doodling activities for you to tackle this month. So grab your 3Doodler 3D pen, some filament,  and let’s craft a few gifts from the heart.

Printable templates to lift your creations off the page 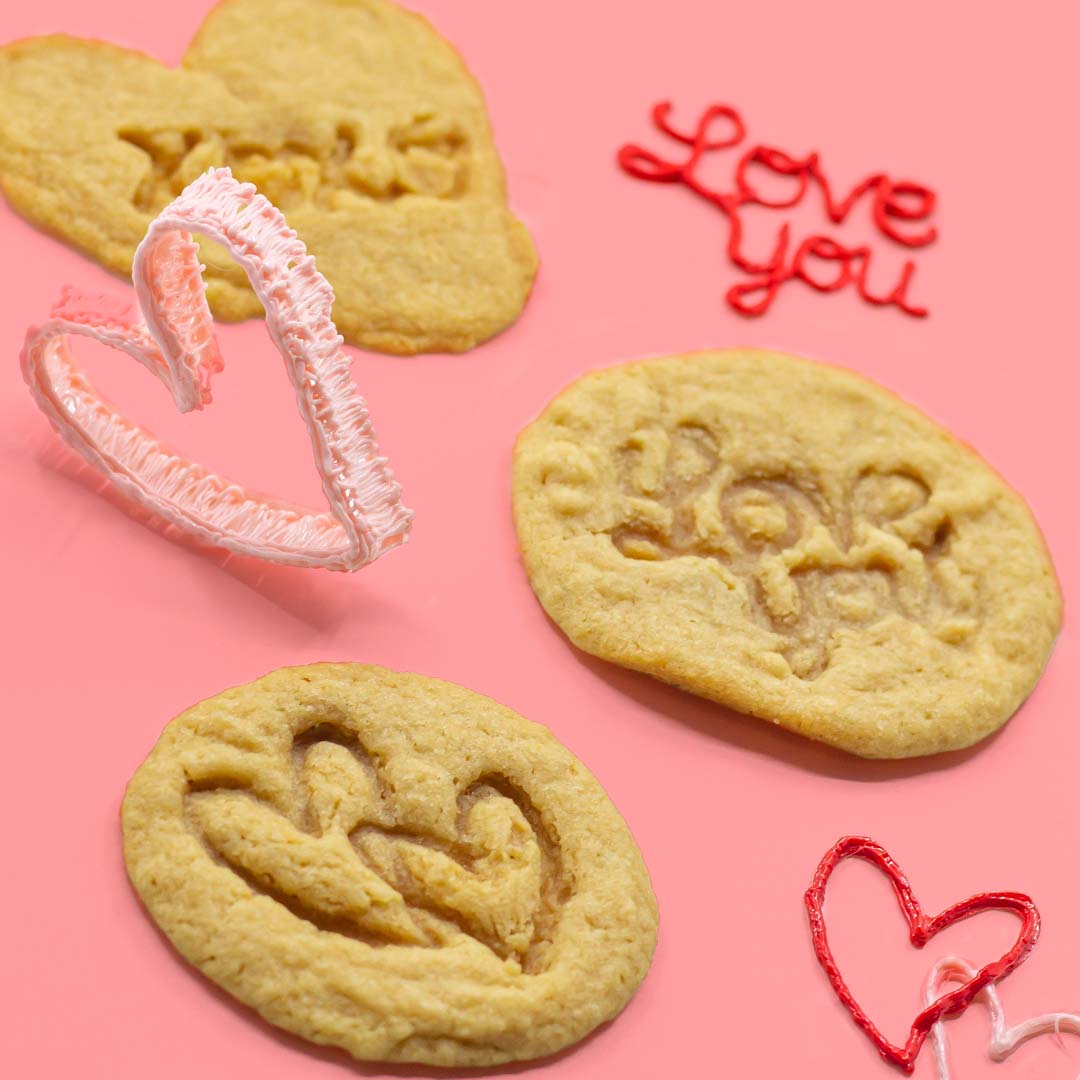 Heart-Shaped Cookie Cutters – This Valentine’s day, up your game with some freshly baked cookies. Not just any cookies, these bad boys have a customized shape thanks to your Doodled cookie cutters. Doodle yours now and get baking. 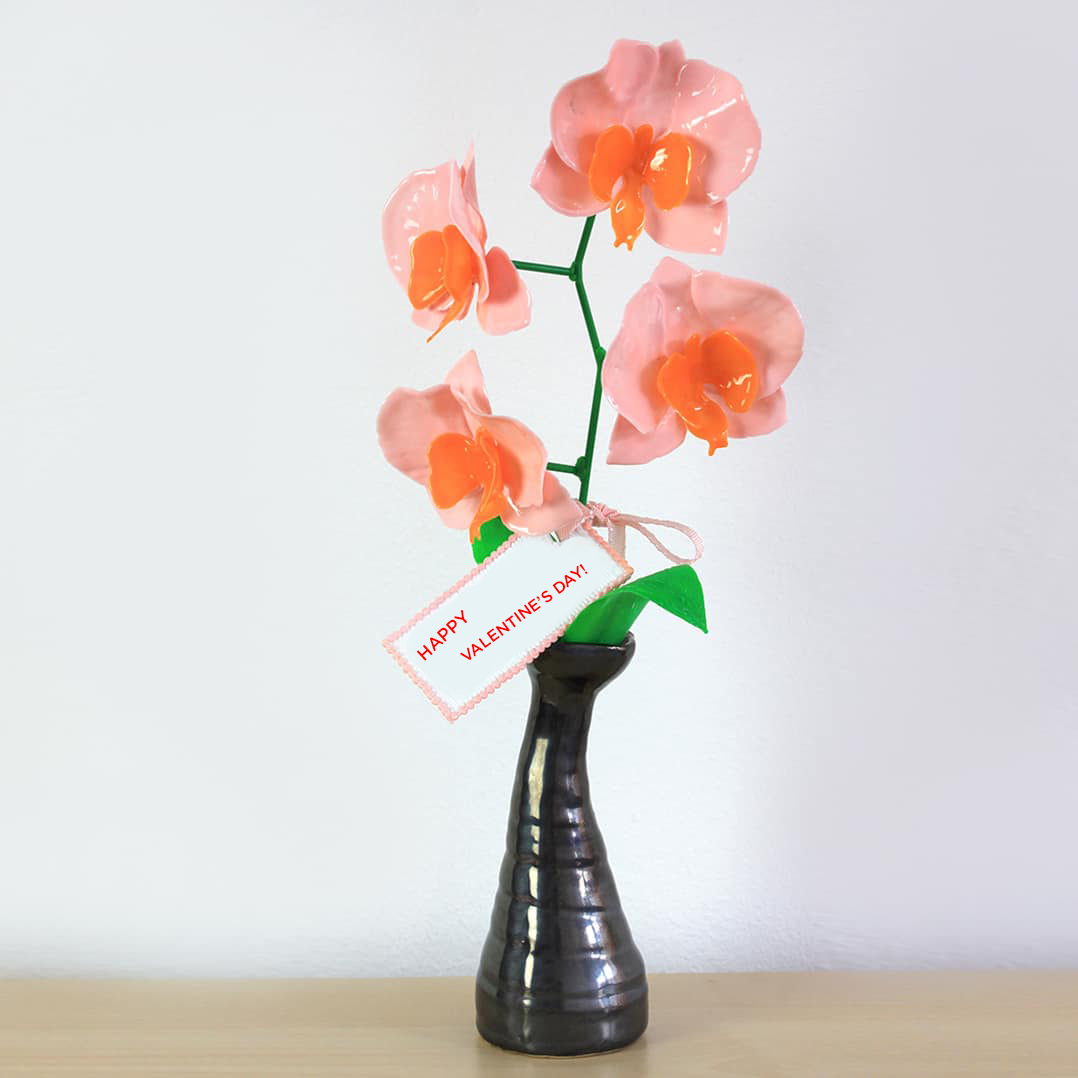 Doodled Orchids – Flowers can bring a smile to almost anyone’s face, but what better way to go the extra mile than to Doodle your own orchids arrangement? Not only will they last longer, but they’re truly one of a kind. 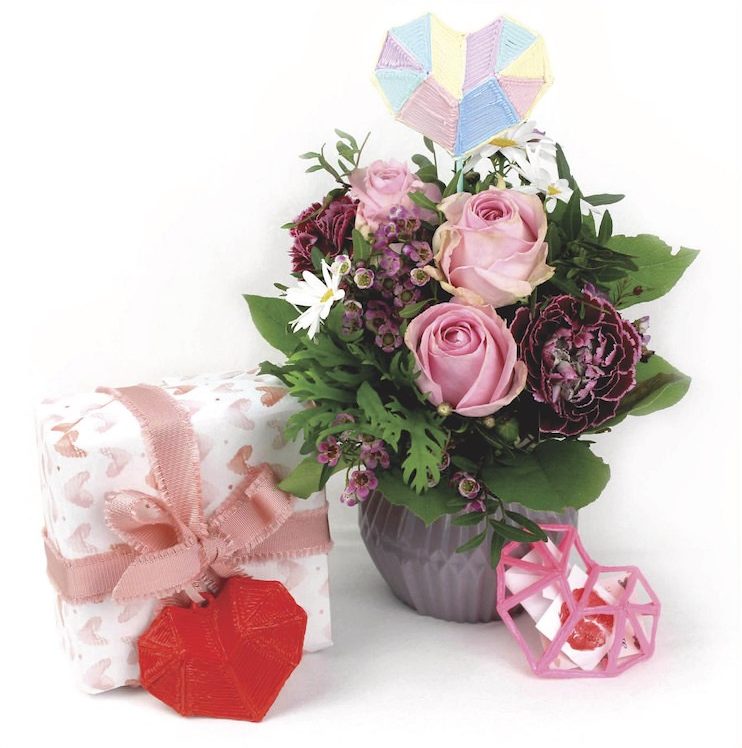 Geometric Heart – Edgy, artistic, and anything but conventional, this simple yet beautiful geometric heart design is perfect for all skill levels. Doodle your own geometric hearts now with this easy to follow stencil. 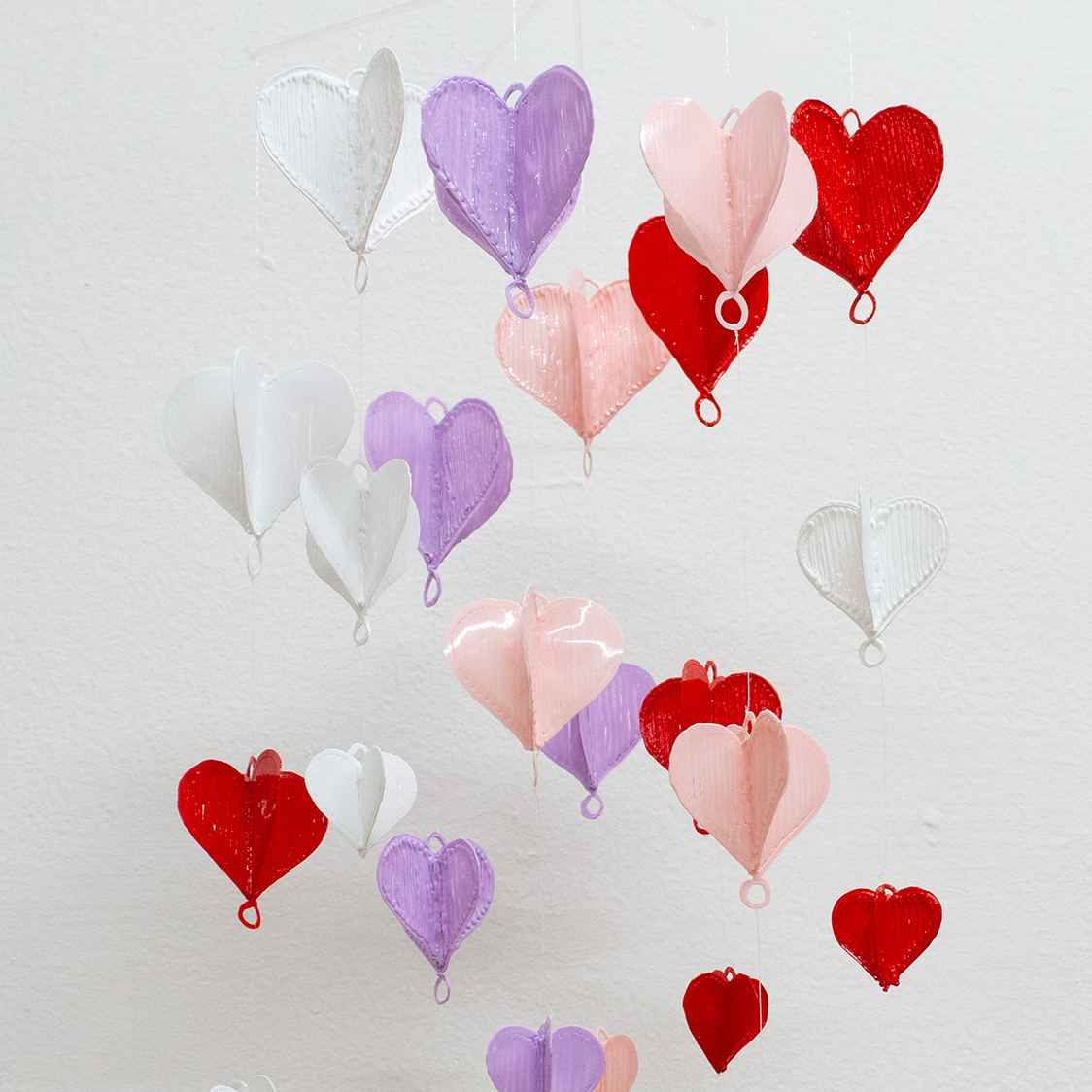 3D Heart Garland – Looking to upgrade your Valentine’s Day decorations? Try Doodling this heart garland. This design is fun and festive way to brighten up any locker, classroom or bedroom.

3D pen refills that will make your heart skip a beat

To help give you that extra encouragement to take part in these DIY projects, we will be running a plastic promo Feb 10-15.  Be sure to head on over to our Deals page to score 20% off on select plastic refills! 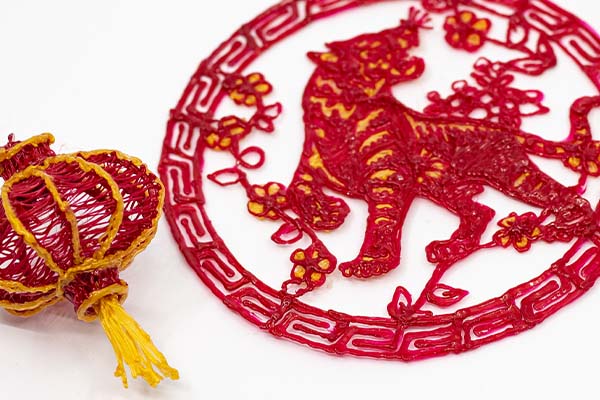 Have you ever received a little red envelope with some money in it, or been witness to a dragon dance? If so, you likely know something about Lunar New Year, which you may also know as Chinese New Year.

As we usher in the Year of the Tiger, more than 1.5 billion people across the world will gather with family and friends to take part in Lunar New Year. So here at 3Doodler, we thought we would dive in to learn a little bit about what the holiday means, and explore some fun activities that kids of all ages can engage in whether at home or at school.

When does the Lunar New Year start?

Unlike the Gregorian calendar, which has Jan. 1 as the beginning of the new year, Lunar New Year doesn’t always take place on the same day. As you may have inferred from the name, Lunar New Year is based on the moon’s phases – each of which lasts around 29 days. We talked about the moon’s phases earlier this month, which you can read more about here. The Lunar New Year takes place annually on the new moon that appears between Jan. 21 and Feb. 20. This Lunar New Year was on Feb. 1, while the 2023 new year will start on Jan. 22.

What traditions are associated with Lunar New Year?

Much like how some celebrate New Year’s Eve to New Year’s Day and the good luck that a new year brings, Lunar New Year is a time for people to reset and look forward to the opportunity of a fresh start that comes with a new year. This important holiday that’s celebrated among East and Southeast Asian cultures, including Chinese, Vietnamese and Korean communities, is a celebration of feasting, spiritual reflection, and honoring of ancestors.

Some other traditions include buying new clothes, getting haircuts for personal self-care, and cleaning one’s house and business so as to remove any clutter and leftover things from the previous year. And of course, traditional family feasting is in abundance.

Another key difference between the Dec. 31 NYE / Jan. 1 New Year’s day celebrations and Lunar New Year, is that the latter is a 16-day observation. Because of this extended break from work, people try to prioritize spending quality time with extended family, which is one of the only times in the year when people are able to do so.

The Year of the Tiger

While last year was the year of the Ox, this year is the year of the tiger, the first since 2010. The tiger is frequently associated with things like courage, ambition, strength and a commitment to help others for the greater good. With the current state of global health and COVID-19 – we could all use a good dose of these traits in 2022.

Each Lunar year is represented by a cycle of 12 zodiac animals. Each zodiac animal is associated with a combination of traits. In case you were wondering what zodiac animal you were born into, or how the zodiac signs line up over the next couple of years, this image depicts it well. 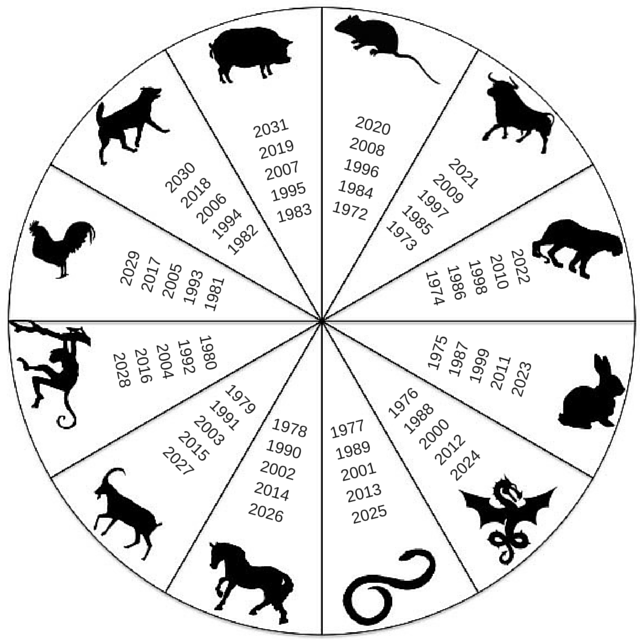 So how does your community celebrate Lunar New Year? As schools teach about this important holiday, a great activity for students is to research the East Asian heritage in their own community and find out what types of Chinese or Lunar New Year celebrations are taking place locally. Some cities might be bringing back festivals or parades. Your local children’s museum might also host a Lunar New Year Celebration day.

Another fun way to learn about the holiday is through books. These are some of our favorite PreK-5 books. And here is a great online book that retells the legends associated with the origins of the 12 Chinese zodiac animals.

The Lunar New Year in Doodles

In addition to the above resources, we also wanted to share a couple of fun hands-on projects to help you celebrate this important time of year. The first is a tiger decal to help bring you good luck in the New Year. 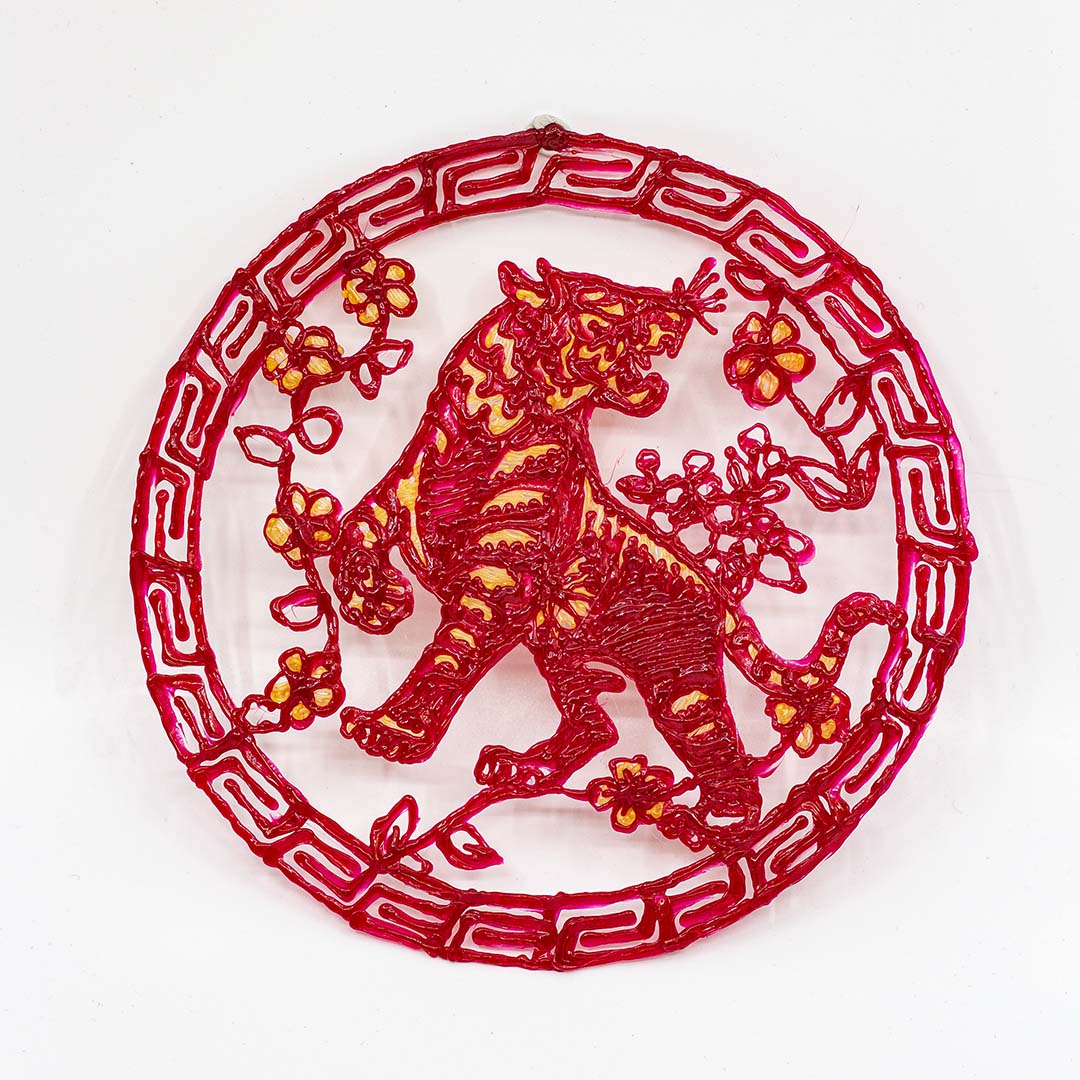 Our second project is a DIY Chinese lantern. In China, the first full moon of the new Lunar Year is traditionally celebrated with a holiday called Yuan Xiao Festival, a.k.a. Lantern Festival. During the festival, houses and streets are decorated with colorful and intricate lanterns. This is our take on respectfully celebrating this tradition. This project is a slightly more complex Doodle and will put your concentration and design skills to the test. Explore the tutorial here. 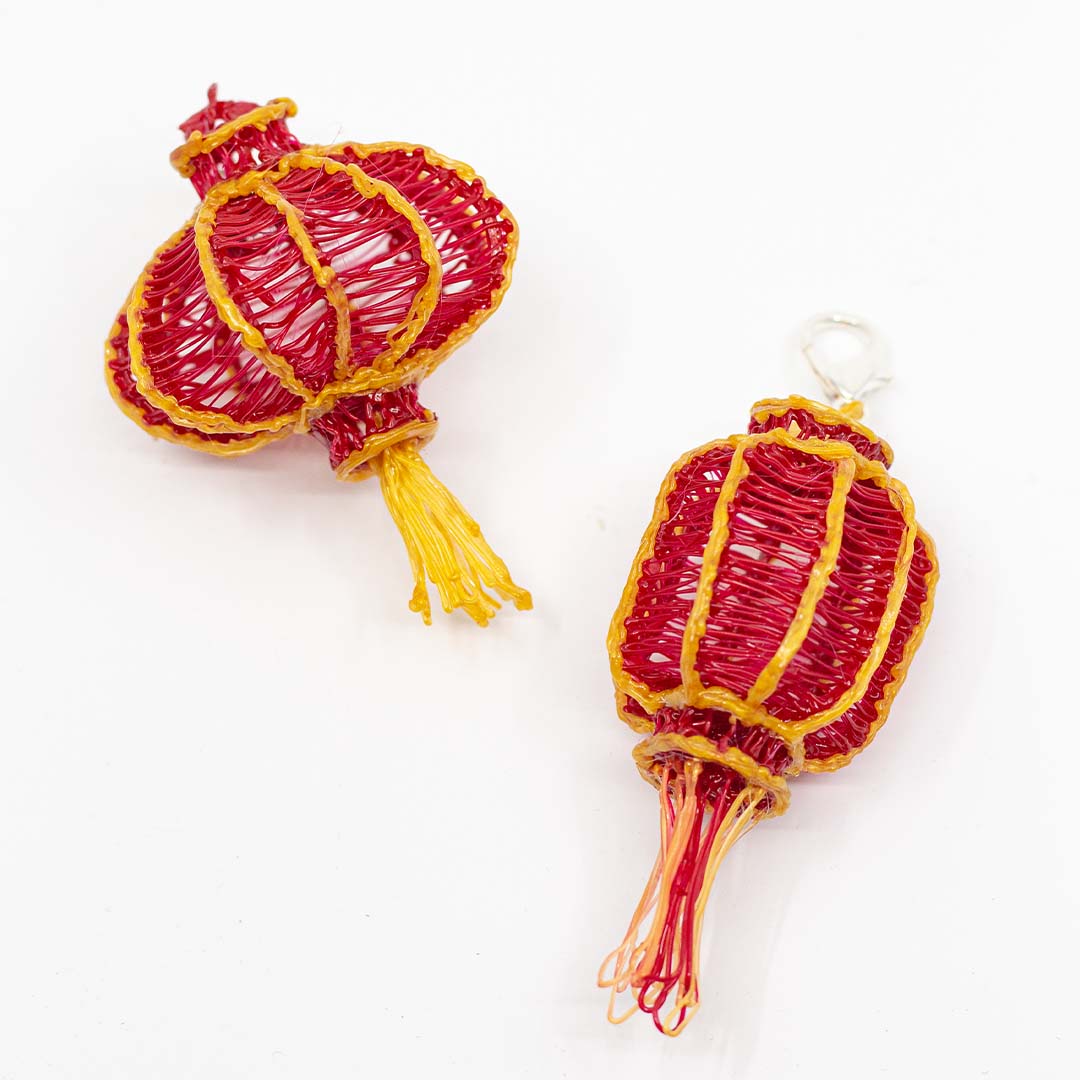 Don’t forget to share your decals or lanterns with @3Doodler #3Doodler #WhatWillYouCreate.