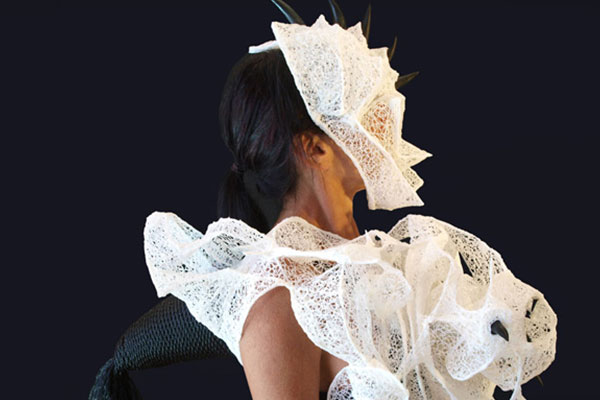 As a hand-held 3D printer, the 3Doodler opens up a world of possibilities, uses, and applications. This week we look at how the 3Doodler hit the runway with high-fashion wearable forms.

Artist and creator Erica Gray’s Forms Organic demonstrates how free-hand constructions with the 3Doodler can lead to incredible and unique creative fashion.

Forms Organic was made using the 3Doodler and ABS plastic in combination with other materials to create a masked headpiece and torso section. The wearable sculpture is a bespoke one-of-a-kind artwork. The piece is inspired by organic figures and animalistic imagery, expressed using a skeletal structure, tails, teeth and claw-like elements.

“It took a few weeks to produce,” explains Erica. “I had a model booked and a deadline to work towards which helped me really focus.”

Creating a large-scale high-fashion piece was a new step for Erica. “While my work is essentially art based, Forms Organic is also a wearable piece, which meant it took a little longer getting the intricacies of the fit right for a moving subject,” she says.

Every aspect of Forms Organic was constructed by hand. “I pre-selected the elements I wanted to utlize within the piece,” Eric says, “such as the polymer teeth, claws and nylon tail – which I also sculpted from scratch.”

Once the additional pieces were created, Erica then got to work with her 3Doodler. “The main bulk of the piece is then 3Doodled around, through, or within those elements,” she says. “I used roughly sketched stencils for some of the joins, and once those parts were ready I just assembled the form, building up layers of filament over select areas to exaggerate and construct the skeletal ridges.”

"I usually work from sketches, however in this case I just let it evolve." Share

Erica was working only with a loose plan of where to go and how to proceed. “I usually work from sketches, however in this case I just let it evolve,” she explains. It was a process fitting for the nature of this piece and helped inspire the title of Forms Organic. “My sculpted works are often themed on organic forms and animalistic imagery, and this piece captures those fluid forms as well as some more rigid skeletal sections.”

Erica says the process helped inspire her for future works and opens up a new realm of possibilities for wearable, high-fashion projects. “I usually produce wearable pieces that stand as a whole, encompassing any accessories as a part of it’s whole,” she says. “Saying that, while I am not actively pursuing accessories as a direction it does have me intrigued. The idea would be to design individually stylised, fluid plastic pieces for arms, legs, shoes, collars – art as accessories.” 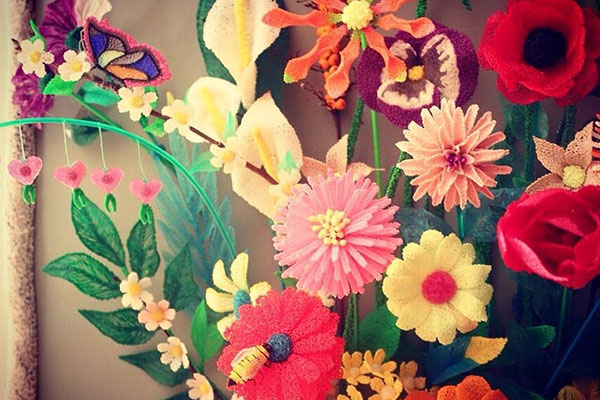 “Initially I didn’t plan to Doodle such a big and detailed piece of artwork,” says Esra Oguz. “I got completely lost in Doodling until someone stopped me to remind me it was time to submit before the Awards deadline!”

Esra won the 2015 3Doodler Interior Design Award with an intricately Doodled basket of flowers, which took a month to complete with Esra Doodling up to five hours each day.

“My first plan was to create a simple bunch of flowers,” she admits. “One by one I improvised each flower, put them together and it turned into a big bunch before I realized.”

Esra first picked up a 3Doodler at the end of 2013. She started by using it to trace 2-dimensional drawings, but soon wanted to try more complex projects.

"Since I have a personality that loves to be challenged, I kept on working at it." Share

“I had trouble imagining how to create 3D objects with soft, smooth, curved surfaces,” she says. But the challenge of learning a new medium didn’t hold her back for long. “Since I have a personality that loves to be challenged, I kept on working at it—in a week’s time I had made my cousin a bird on a swing. It didn’t look spectacular but it sparked my interest in 3Doodling which has continued since.”

Esra soon developed her own unique method and style for creating 3-dimensional forms. She first begins by creating a wireframe to plan the structure of her objects. From this, she creates a stunning variety of objects, from cars to creatures.

“I use a variety of objects to start a base,” she explains, “for example crumpled newspaper. Sometimes I draw the initial image to start building the wireframe or Doodle in 2D before I lift it up and start using it as a base for turning it into a 3D structure.”

The next step is turning a 2D base into a 3D frame. “I usually use ABS filaments for wireframes because it stays strong when I fill the surface,” Esra says. “I’ve gotten used to making them, but it’s still the most time consuming part of Doodling for me.”

Esra explains that most of the time she simply Doodles around a hollow 2D piece to create a frame around it. “The other technique I use is breaking an idea into pieces and then assembling them,” she says. “Creating an object in this fashion is more like engineering.”

The results are a stunning variety of sculptures, all with Esra’s own unique and distinguishable style.

One of the hallmarks of Esra’s style is the uniform appearance on the surface of her Doodles. The key for this, she says, is patience. “I try filling the surface without any space patiently and avoid Doodling in the same space more than once to ensure textural consistency,” she explains. “Another method I use is reheating the Doodle to allow the plastic’s surface to become smoother, but the trick here is to do it without loosing the Doodle’s overall form.”

And just as with any artistic medium, practice makes perfect. “The more I Doodle the more comfortable I become with how the plastic behaves, how to control the pen, and everything else,” says Esra.