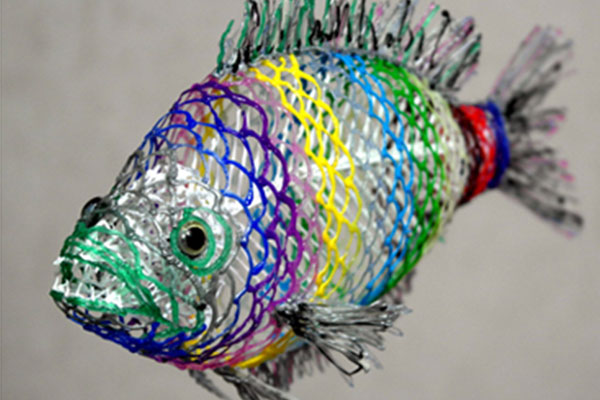 Korean wire artist Jina Sim has taken 3Doodler around the world—in a manner of speaking.

Jina typically works with wire, creating complicated forms from tangles and twists. She wants her work to serve as a “boundary that distinguishes the outer world of an object, to separate what is real from what is not.”

Her complex wire-frame work allows the viewer to see the inner and outer aspects of each object simultaneously. Recently, Jina has began taking this concept to new levels with the 3Doodler. Using the same basic design structure as with wire, she now creates her clean yet complex lines with PLA drawn into the air.

Her Doodled wireframe globe showcased the stunning possibilities that the 3Doodler can offer.

Jina began with a simple styrofoam ball, covering the surface with paper tape which she says prevents the PLA plastic from sticking, making the Doodled lines easier to remove.

On the tape, Jina then sketched the outlines for the countries and continents before setting to work Doodling along the stencil she had made for herself. She was careful to work only on half of the globe, so she could easily remove the the Doodle from the ball.

Once the two halves were complete, Jina Doodled them together to create a stunning finished product.