How Two Artists Shared a New Point of View

Art allows us to see the world from the point of view of the artist as they show their own experience and perspective in their work.

For two Korean artists, the 3Doodler provided a new way to express themselves through their art.

“If I could have anything in the world, I’d want to stand and walk on my own two feet and dance,” says Kim Hyung-hee. The 47-year-old painter was paralyzed in a traffic accident, and knows just how important art and creative expression can be in aiding in recovery and mental health.

Kim now works as a clinical art therapist, and discovered the 3Doodler as a new way to bring dimension and life into her artwork.

“I drew a three-dimensional flower on canvas,” she says, recalling her first Doodle. “In contrast with common drawing and painting, I can draw everything in new ways, and it’s new to be able to draw in three-dimensional ways.”

Hyung-hee has had private exhibitions of her work, as well as showcased how the 3Doodler can be used as a creative therapeutic aide in festivals and and shows around Korea.

“There are so various and beautiful colors in 3Doodler plastics,” Hyung-hee says, “and I can draw everything in three dimensions and unique ways.”

Weon Jea-hyun is a 27-year-old artist who specializes in kinetic sculpture, focused on combining movement with art.

Jea-hyun was instantly drawn to the 3Doodler and the new possibilities a 3D printing pen could offer.

“The first thing I tried Doodling was my name. It was very strange but awesome that my handwriting was realized into 3D immediately,” Jea-hyun recalls.

As an extension of work from an 2013 solo exhibition titled Observation, Jea-hyun used the 3Doodler to create a layered piece meant to showcase a shift in perspectives.

“People observe each other’s daily life. Someone can observe me, and I also can observe someone,” Jea-hyun explains. “Someone’s routine can be interesting for the other, and this metaphorical change of viewpoints can be a mechanism which assigns variability and interest to routine life.”

Jea-hyun’s own cat was the source of inspiration and the piece shows a layered crowd of attentive felines staring out at the viewer.

“In this work, cats can be interpreted as the projection of people,” Jea-hyun explains. “They observe others—the viewers—but also the viewers observe them—the cats.” 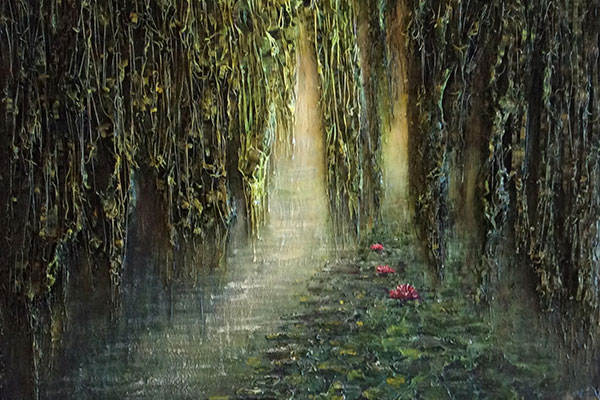