Home is What You Create

“Change. Change is always hard, but good,” explains Leah Wyman, Head of EDU at 3Doodler. “I think mentally preparing for the stress and struggles and accepting that they will come but be worth it is key.”

The 3Doodler team knows a thing or two about change. With nine nationalities represented across our team, most of 3Doodler knows what it’s like to create a new life and find home in a different country.

Leah has called many countries home. She’s lived and worked in Germany, Iceland, Jamaica, Canada, and the Netherlands, and has now returned to the USA to join 3Doodler in our New York office. In each place she has found ways create a sense of home, the same as many members of our team.

Daniel Cowen, Co-President and COO of 3Doodler, is a UK native who has lived in over six countries. “You start to look forward and work out how changes in your life will fit with the place you are in,” he explains. “In short, it’s about adapting, which at first is about friends, and eventually is about the deeper meaning of ‘home’.”

That deeper meaning and personal concept of “home” can mean something different to everyone, but in the end it all comes back to the basic senses. When finding familiarity, we rely on what we can see, feel, smell, touch, and perhaps most importantly, taste.

Food creates a strong sense of cultural identity, and is a major aspect of what we consider part of home. The smells and tastes of our childhood are often what connect us the strongest to that sense of nostalgia we associate with home.

"Like many people, taste and smells always trigger my best memories. I do my best to try and recreate my mom’s classic dishes." Share

“The first thing I try and do when I move to a new country is find the best Indian restaurant,” says 3Doodler Creative Director Faraz Warsi. Faraz holds Canadian citizenship, but still identifies closely with his Indian heritage. Having lived in the Middle East, India, Canada, Hong Kong, and the USA, he’s used to the shuffle and change of relocation. “They call us Third Culture Kids,” he says. “Identity crisis is sometimes more fitting.”

But through various countries and continents, Faraz has discovered a sense of home can always be found in the kitchen. “Like many people, taste and smells always trigger my best memories,” he says. “I do my best to try and recreate some of my mom’s classic dishes—the keyword being ‘try’. Sadly it’s never as good.” Erin Song, 3Doodler Junior Designer, shares the same sentiment. A South Korean national who grew up in Hong Kong, Erin now works in the 3Doodler New York office. “In all honesty, I really miss the food,” she says. “I incorporate the food I would eat in Hong Kong by cooking a familiar dish whenever I feel homesick.”

“I am what I eat,” agrees 3Doodler E-Commerce Manager Jim Toernqvist, who emigrated from Sweden to join the 3Doodler team. “Sweden is very much a part of what I consider good in the culinary world.” Jim says he brings a bit of “home” into his new life by creating meals that remind him of Sweden. “Swedish cuisine is mostly simple and quick to make; my dinners are something to look forward to.”

But as Daniel said, change is all about adaptation. While the smells and tastes of home inspire nostalgia and make us feel more at ease in a new place, soon new foods become familiar and start to create a new sense of what it means to feel at home.

3Doodler Marketing Director Kelley Toy is a New Zealand native who now lives in Hong Kong. She says the new foods and tastes were the first things she found herself incorporating into her everyday life. “Asian food is a pleasure to explore and experience,” she says, “and the convenience, all-hours availability and on-demand nature of food in Asia is something that is easy to adopt.”

But creating a sense of home doesn’t begin and end with what you eat, of course. Whether we’re aware of it or not, what we see every day ends up creating a pattern that we associate with home.

“For New Zealand, it’s a specific color palette combining sky, water, sand or dried grass, and green pastures,” says Kelley. “It’s a unique color palette that you don’t see anywhere else so I can always pick a New Zealand sky or landscape from these colors.”

“Yellow and blue is always my association with Sweden,” says Jim. “It’s the colors of the Swedish flag, and IKEA.”

“Grass. Green manicured grass,” says Dan. “It’s calm, trimmed, reliable, and there’s so much access to it through the incredible parks of London, which are what I miss most.” “I really don’t want to sound cliché, but Chinatown really reminds me of home,” says Erin. “New York’s Chinatown has a very similar architecture and essence to the old areas of Hong Kong.”

For most of us who have moved our lives abroad, the concept of home is often oddly combined with reminders of change. Both become part of daily life as we continue to adapt and create something new.

Sometimes all it takes is one building to remind us of this. “When it comes to New York, it’s all about the Empire State building,” says Erin. “As much as I love the Chrysler building, the Empire State Building is the building I see every day when I walk to and from work. It is a constant reminder of how much my life has changed.” 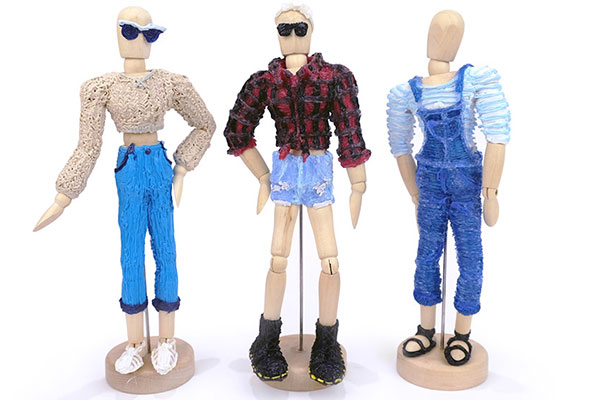 Last week we looked at how 90s Nostalgia is in full swing, and could also be contributing to a new wave in creativity.

So we decided to get creative as we look at 90s inspired trends making it big in 2016! The 90s are back in style, and we’ve put together three Doodled outfits combining the best of 90s-chic, and modelled by our stylish trio of mannequins. “Mom jeans” got a bad rap after their heyday in the 90s, but 2016 is bringing comfy-lazy-chic back into fashion! Get creative and pair your mom jeans with a cropped sweater, baby-doll T or spaghetti-strap tank. Finish off the look with a shimmery pair of jelly shoes and killer shades for a total 90s throwback. Every 90s cool kid remembers rocking overalls. Now the fashion world’s most utilitarian way to dress is back on trend! This is easily the most creative trend to get behind. Overalls are an artist’s dream, making easy cover-up for paint splatters and still showing your easy-going nature! Slouchy style, easy to match, and loads of pockets – overalls are leaving last year’s romper trend by the wayside. The 90s were when fashion-conscious grunge rockers discovered that Dr. Martens are the perfect shoe for ANY outfit! Tortured musicians and other creatives know that whether it’s a plaid skirt, cute sundress, or even ripped jean shorts – there’s no better shoe for bringing back that 90s grunge style. Pair with a plaid shirt, and make it cute with a scrunchie or fabric headband!

Doodle up your favorite 90s trends in 2016 and be sure to tag us @3Doodler and use #3Doodler and #WhatWillYouCreate!