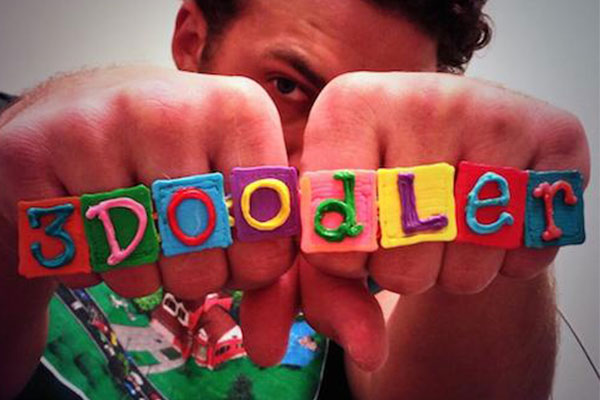 “One of my favorite things about the 3Doodler is that every time I use it I come up with new methods to get the results I’m looking for,” says Louis DeRosa. “I don’t anticipate that exploration ever ending with this product.”

After only a few days after receiving his pen, Louis caught the eye of 3Doodler when he posted an adorable Doodle of his dog Bindi on social media. Impressed by how easy Louis made Doodling look in such a short time-frame, "The freehand ability offered by the 3Doodler makes it even more versatile than a conventional 3d printer." Sharethe company reached out to him for further collaboration. Louis has now helped the team with several projects including the MoMA Window Display, and has also led the way to discovering new tricks and techniques to use the 3Doodler to its fullest potential.

Louis says using the 3Doodler did take some getting used to, as it was an experience like none he’d had before. “When I first got the 3Doodler I wanted to use it like a regular 3d printer, building up layer at a time,” he explains. “But I soon realised 3d printers have to work that way. With the 3Doodler you’re free to work on whatever part of your creation you want without being limited to working from the bottom up.”

This realization encouraged Louis to experiment more with the pen and what it could do. “The freehand ability offered by the 3Doodler makes it even more versatile than a conventional 3d printer,” he says.

Experimentation has led Louis to discover new techniques that have surprised even the 3Doodler team. “I’ve found that combining techniques leads to the most interesting and intricate doodles,” he says. “Laying out structural elements flat on a sheet of paper and then peeling those up and putting them together and fleshing them out in midair has resulted in some of the coolest things I’ve made so far.”

Louis says sometimes the simplest solutions are best when it comes to Doodling. “Paper works as a really great under structure for creating all sorts of things,” he explains. “For example, I’ve made "We have only just begun to see what creative minds can do with the 3Doodler." Sharecustom rings by rolling paper around my finger to get the desired size then taking it off and taping it in place so I have the perfect size template to then doodle around. Once you’ve got your ring the right size you can doodle anything on top of it and get as wild as your imagination will allow.”

Louis says that ultimately the 3Doodler is a new creative tool that can inspire anyone with drive and imagination. “Like the many different ways people have used the paintbrush over the centuries, we have only just begun to see what creative minds can do with the 3Doodler, and we are not limited by canvases!” he says. “Truly, imagination is the limit, and when that’s the case anything is possible.”