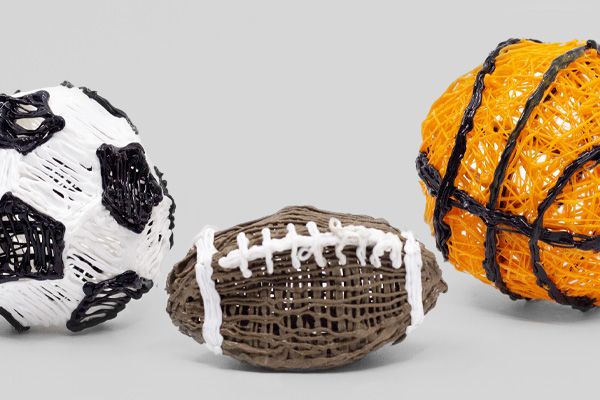 As the weather cools, take classic games like soccer, football, and basketball to the next level with 3D designs you can enjoy indoors!

Many sports were meant to be played outdoors, but when the rain sets in or courts aren’t available, you can take the fun indoors. Create games with your 3D pen and get a few friends together to test their design skills. This week we’re exploring three classic sports!

The game we currently refer to as football started as a mashup between soccer and rugby in the United States. The first football game was played as an intercollegiate sport between Rutgers and Princeton on November 6, 1869, in New Jersey. Teams at elite colleges and universities across New England took up the sport in the 1870s.

Walter Camp, known as the “father of American Football,” played halfback and served as the team captain for Yale as an undergraduate from 1876-1881. Camp’s position as captain enabled him to guide the game’s rules for the newly formed Intercollegiate Football Association (IFA). He instituted two significant changes. He did away with an opening “scrummage” and required that a team give up the ball if it failed to move down the field a certain number of yards or “downs” as we know them today. Camp added several other improvements, such as the 11-man team, the quarterback position, the line of scrimmage, and the scoring system.

In 1920, the American Professional Football Association was established, later known as the National Football League (NFL). Football remains one of the most popular sports in the United States.

Try out a tabletop version of the game with friends. It’s much easier to play and a fun way to pass the time. Now, you can create a version to play at home using your 3Doodler 3D printing pen.

One Game, Many Names: Football or Soccer

Football, or soccer, is the most popular game in the world based on the number of participants and spectators. Given the game’s simplicity, teams form quickly and play on everything from official playing fields (pitches) to gymnasiums, parks, playgrounds, streets, and even at the beach.

Modern football as we know it today traces its roots to Britain. It was there in the 19th century that independent schools took up the sport and attempted to codify the rules. Printed rules were distributed in 1863 by the newly formed Football Association. By 1877, 43 clubs were participating in a cup competition. National leagues in other countries started quickly and created their own cup competitions. In 1904, representatives from seven European countries gathered to establish the Fédération Internationale de Football Association (FIFA).

Today, FIFA includes 211 member associations, making it larger than the United Nations. Member associations must accept FIFA’s authority, adhere to its laws, and provide the infrastructure to support the sport. The World Cup, FIFA’s premier month-long tournament, will take place in Qatar, with 32 countries competing from November 20 to December 18, 2022.

While watching the World Cup matches, doodle your own soccer ball. Go with the more traditional black and white, or mix it up with color combinations of your design.

Basketball is the only widely recognized sport with American origins. In the winter of 1891, a classic New England storm was brewing and James Naismith was looking for ways to keep his students busy indoors.

As a 31-year-old graduate student and physical education teacher, Naismith was teaching at International YMCA Training School or Springfield College in Springfield, Massachusetts. He wanted to create a game that could be played indoors with many players and offer plenty of exercise. He approached a school janitor to get two boxes. Instead, he got two peach baskets. Undaunted, he quickly nailed the peach baskets to either side of the gymnasium balcony. The students played on teams attempting to get the ball in the other team’s basket. The first game ended in a brawl, but students were so taken with the new sport that Naismith continued refining the rules.

Gather friends and craft a basketball in 3D with our easy-to-follow stencil and tips. It’s a fun and creative way to honor the sport and celebrate the history of basketball.

It’s game time! Create one or all and celebrate sports with 3Doodler. Share your designs with us @3Doodler. 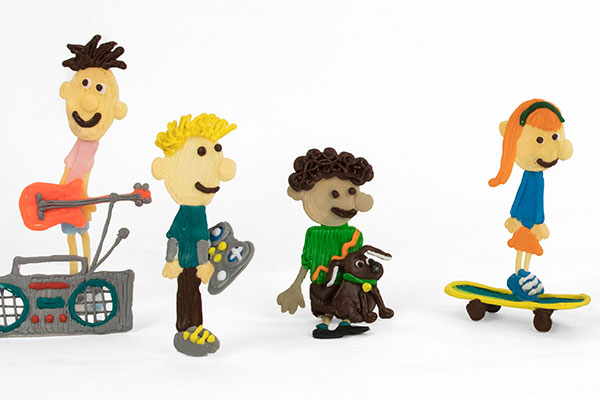 The story of Greg Heffley’s struggles has inspired millions, and it all started with a diary.

Research shows that active storytelling and creativity has long-lasting impacts on children’s development that carry on well into adulthood, meaning the stories they tell now can have a positive impact on shaping the adults they’ll eventually become.

Does your kid have what it takes to be a Wimpy Kid with great storytelling? Here’s why you should help them get there:

For a limited time, you can get a free 3D Diary inspired by Diary of a Wimpy Kid along with a free pack of 3Doodler Start Plastic with every purchase of a 3Doodler Start Essentials or Super Mega Pen Set and give your kids a guided way to help inspire them to create and tell their own stories, while creating touchable and permanent characters that they can use for endless future story combinations. 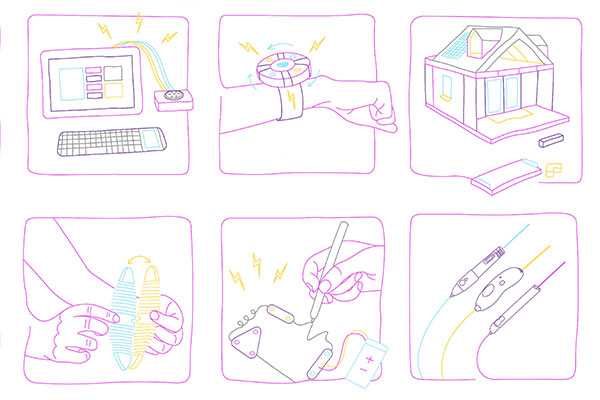 School’s out for summer, but that doesn’t mean learning and creativity has to stop!

It’s no secret that 3Doodler is a big fan of tactile learning and imaginative play. And we’re not the only ones—the toy trends for 2017 show a strong focus on STEM and STEAM, promoting creativity and making education and discovery more fun.

Now that summer has finally arrived, here’s our recommendations for the top 11 toys to help kids continue to learn, explore, and create all summer long:

Looking to use this guide as a handy reference? Get the full guide as a PDF here. 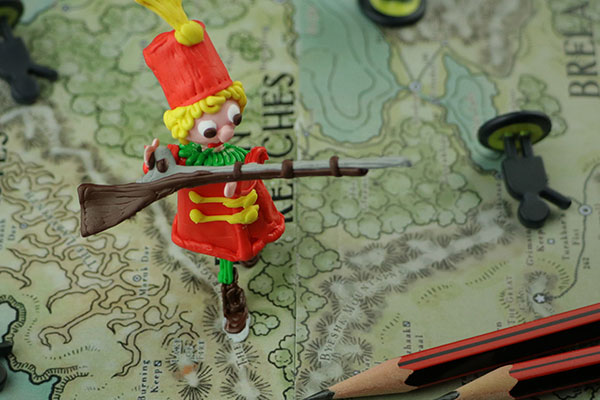 For some, the adventure doesn’t end when the book closes or the credits roll. Fan Creators take inspiration from their favorite movies, games, comics, and cartoons and make incredible things. To see what that passion can produce, we gave some hardcore fans the latest 3Doodler Create for two weeks.

Finding a 6-foot tall panther with alligator scales and an 8-foot tale that ends in a stinger is tough.

Jon Giordano should know, he’s looked pretty hard. Fortunately, he isn’t searching the wilds for a nightmarish cryptid, he’s looking for a miniature for his roleplaying game.

At work, Giordano is a “numbers guy.” He teaches math and is working on a PhD in the subject. But while roleplaying games are known for their dice rolls and probability tables, what attracts him to the hobby is the ability to tell stories. Creating and exploring fantastic worlds with friends is the heart of the hobby, and as he has ventured into more obscure role playing games, Giordano has run into a minor hurdle that has nothing to do with storytelling or imagination: a lack of miniatures.

Miniatures are an important part of many role-playing games. Conflict and combat are common themes in these games. “Players will often get into situations and have to fight their way out of it, and make use of markers to keep track of the complexities of positioning in combat. That way you can look at the board and immediately tell that those two people are fighting against the giant robot in the corner, and those two are ducking behind trees.”

“If I were playing a standard medieval fantasy game,” Giordano says, “I’d be able to find tons of useful figurines. Ditto for sci-fi.”

That’s why Giordano was excited to get his hands on a 3Doodler. He wanted to be able to create custom figurines that heighten the experience for players in his role-playing games, like one campaign based on Native American mythology. The 3Doodler struck him as particularly useful for games that feature obscure monsters and creatures that may not be sold in stores. With the original 3D printing pen in his arsenal, Giordano believes that he can create fantastical beings that are even more obscure than the dragons found in your typical dungeons.

One of the major advantages of table top roleplaying games is that players can encounter anything that the game master can imagine. Personalized galactic warrior? Magical talking flowers? Mystic double-headed swan? All things that could appear as adversaries, or allies, in a tabletop game. Unfortunately, finding figurines for the more outlandish creatures can be just as hard as defeating them in combat.

"You’ll get that wow moment that a description just can’t give, the 3Doodler will really let me show players what I’m imagining for them without relying on theater of the mind." Share

Giordano was able to produce three figures with his 3Doodler. The first was a corrupted bird god, shaped like an egret but with plumage darkened by negative energies. As a sort of a counterpart, he also fashioned a Buffalo minotaur who watches over a herd. The Buffalo spirit was attached to a spare base from a standard miniature to provide more stability, but the bird could stand on its own. Lastly, Giordano created a mercurial river spirit by letting the “flow” of plastic from his 3Doodler define the initial shape.

Giordano was really happy with how the figurines came out, and is looking forward to incorporating them into a future campaign.

“You’ll get that wow moment that a description just can’t give, the 3Doodler will really let me show players what I’m imagining for them without relying on theater of the mind.”

The 3Doodler is a great solution for anybody who wants to add a bespoke character to an encounter, or even modify an existing figurine. With imagination and a steady hand, almost any small-scale figurine can be crafted. The potential for crossovers, custom variations on existing figures, or anything else a game master dreams up are almost endless.

A 3Doodled figurine also has a few unique advantages over other miniature options. Imagine the personal connection you can form with a figurine you or a friend crafted by hand compared to a store-bought one. While paper cutouts are another way to create one of a kind representations of fantastic creatures, they aren’t very durable compared to solid plastic. Combining pieces from multiple figurines in a kit-bash is another fun alternative, but if that’s your preference, being able to extrude extra plastic from a 3D printing pen may come in handy as well.

Even mainstream tabletop game masters might want to consider using a 3Doodler. Dungeons and Dragons has over 40 years of published materials describing various monsters and enemies for players to encounter. Even without getting into many of the supplemental bestiaries published by other companies, there are hundreds of different creatures and monsters described in official materials. Some of the more obscure variations have figurines that are almost impossible to find, if they were ever made at all.

So next time you are planning an adventure and want to show off an obscure monster you found in a forgotten bestiary, the 3Doodler might be the perfect way to wow your players by conjuring one by hand. Or better yet, create something entirely new and give it a physical presence to match your own description.